Marjorie Jacqueline "Marge" Simpson,[5] (née Bouvier; born March 19[6]), is the happy homemaker and full-time mom of the Simpson family. With her husband Homer, she has three children: Bart, Lisa, and Maggie Simpson. Marge is the moralistic force in her family and often provides a grounding voice in the midst of her family's antics by trying to maintain order in the Simpson household. Aside from her duties at home, Marge flirted briefly with a number of careers ranging from police officer to anti-violence activist. 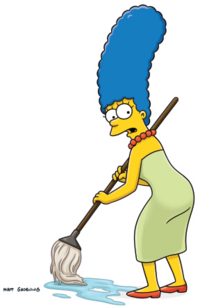 Artwork of Marge from season 24

Marge Bouvier was born on March 19, She is the third born child of the Bouvier family. Marge was raised by her parents, Jacqueline and Clancy. She has a pair of sisters, the joyless twins, Patty and Selma, both of whom vocally disapprove of Homer.

Marge went on to attend Springfield High School, and in her final year met Homer Simpson. She was at first wary of Homer, but agreed to go to the prom with him, although she ended up going with Artie Ziff. However, she regrets going with him because he tried to have sex with her afterwards. Artie takes her home and later on she picks up Homer, walking home, in her car. Marge tells him how much she regretted going to the prom with Artie instead of him, causing Homer to somewhat repair the strap of her dress with the corsage he got her. After that decision, her sisters showed their discontent towards him and ultimately think he was just wrong for her. However, Selma does show she's willing to make a sincere attempt to like Homer for Marge's sake, causing him to have a higher opinion of her. Whereas, Patty never attempted to try and is always on Marge's case to leave Homer, thus it's why she and Homer hate each other.

After the two started dating for several years, Marge discovered she was pregnant with Bart, and she and Homer were married in a small wedding chapel across the state line. Lisa was born soon after, and the couple bought their first house.

She used to leave her children playing at Toddlin' Town while spending time with other moms, a group she calls The Cool Moms. They all lost contact to each other, but after many years they re-encountered.[7]

Marge is the mother of the Simpson family, who spends most her time doing housework, caring for Maggie, being supportive of and indulging Lisa and either disciplining Bart or protecting him from Homer's wrath. Marge is the only member of the family who encourages church attendance. She also appears to have significant athletic ability. She is bilingual, being fully fluent in French.

Despite these tendencies Marge had her fair share of wild escapades throughout the show's history. She was once a police officer in Springfield,[8] took therapy for flight fear,[9] was jailed for shoplifting,[10] became a gambling addict,[11] showed alcoholic tendencies,[12] was an unwilling participant in a cross-country police chase,[13] overdosed on steroids,[14] cheated in a cooking competition[15] and developed amnesia.[16]

Marge's character folder in the Hall of Records on The Simpsons website.

Marge is a foil to her reckless and impulsive husband. Nevertheless, she is a good wife to Homer and a caring mother to her children. Having high morals and a tendency to be a 'wet blanket' as Homer puts it. She dislikes and tries to avoid taking any sort of risk, can be fearful of new things and set her life to a routine to the point she actually wore a groove into the carpet going from the kitchen to the bedroom and the basement from her constant housework. She tends to consider anything that isn't completely plain to be amazing or exotic, even if they're not all that special. Such as deviled ham opposed to normal ham and buttered noodles opposed to unbuttered noodles. She has also been depicted as a killjoy and attempt to stop things other characters otherwise find fun. She always believes she has a good reason for doing so even if it's only her who has a problem. She once Itchy and Scratchy banned because Maggie injured Homer after imitating a scene from the cartoon.[17] She tried to demolish a burlesque house even though it hurt no one and no one else wanted it destroyed,[18] and she outright says if something isn't to her taste, no one else should be allowed to enjoy it.[19] Homer sums up his wife when he tells her: "If it was up to [Marge], all we'd ever do is work and go to church."

Marge usually wears a strapless green dress, red shoes, tall blue hair and an orange pearl necklace. The pearl necklace is a family heirloom and she is seen to have a big drawer full of them.[20] Lisa also wears a pearl necklace, but with white pearls. Doctor Hibbert revealed she has webbed feet.[10] She remarked she used to have a "perfect 26-26-26" figure.[21] 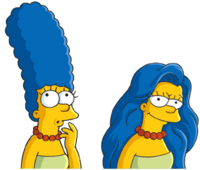 As a teen, Marge had waist length hair she always wore down, but got the idea to wear it in her trademark beehive for senior prom;[22] This is sometimes contradicted by recent flashbacks showing Marge as a child, where she is portrayed with her hair worn tall. Her hair is thick enough for her to keep objects like the family savings in it.[23] Her hair is once shown close to her knees, consistent with the logic a lot of hair would be needed to create her tall beehive.[24] It was revealed by Homer Marge dyes her hair with blue dye #56, stating "She's been gray as a mule since she was seventeen." [25] Because of her unusually large hairstyle, her height is reported to be 8'6", as noted by Apu.[10] Her hair was blue before she met Homer and was brunette at one time due to Marge ironing a piece of her hair for a long time.[26]

Politically, Marge generally aligns with the Democratic Party. She once mentions she voted for Jimmy Carter ("twice" according to Lisa),supported the candidacy of their state's progressive governor Mary Bailey, and also claimed to have been extremely depressed when Lyndon B. Johnson died. She, however, appears to be a Conservative Democrat, unlike the Left-Winged Lisa.

Marge is a very talented painter. When she was a teenager she had an intense crush on Ringo Starr and painted a large number of portraits of him. She also wrote to him, but only received a reply 25 years later. After Homer discovered her old paintings, Lisa encouraged Marge to enroll in an art contest where her portrait of a drunk Homer asleep on the couch won a local art competition. She was hired by Mr. Burns to do a portrait of him. After many attempts, she almost gave up until a belated response from Ringo Starr, (stating she had talent), inspired her to continue. The resulting portrait won even Mr. Burns' praise, a massive feat in itself, and was placed at the Springfield Art Museums Burn's Wing.[27]

Marge is also a very talented cook. She once bought a pretzel business, which flourished with the aid of the mafia.[28] She entered various cooking challenges, although circumstances such as vengeful competitors and overheated ovens cause her to lose and once, sabotage other competitors. Marge says she feeds the family on twelve dollars a week, using sawdust to pad Homer's food.[15] Generally she is regarded as a very good cook, despite the unusual fact she knows of fewer than eight spices and apparently constructs very bad ice cream sundaes. She is especially renowned for her pork chops, Homer's favorite dish. She once worked in Au Naturel, an erotic bakery in Springfield.[29]

Marge had many jobs, most of which lasted a short period of time, these include:

In the future, Marge leaves Homer after he blew the family savings on an underwater home. She dates Krusty the Clown. Homer tries to win Marge's love back by beating him up, and is beaten up himself. Marge gets back together with Homer.[33]

In "Treehouse of Horror VII" segment "The Thing and I", it is known Marge gave birth to Siamese twins: Bart and Hugo. Hugo was thought evil, so he was kept in the house's attic. Hugo attempts to sew him and Bart back together, but he is stopped by Doctor Hibbert. They discover Bart's scar is on the other side, so he is the evil twin after all and is kept in the attic instead, while Hugo has dinner with his family.

This section is transcluded from The Simpsons: Tapped Out characters/Simpsons. To edit it, please edit the transcluded page.

Marge Simpson is voiced by Julie Kavner, who became famous for being on the TV series, Rhoda.

The episode "That '90s Show" (season 19, 2007) contradicted much of the established back-story; for example, it was revealed Marge and Homer were childless in the early 1990s although past episodes suggested Bart and Lisa were born in the 1980s.

As with many Simpsons characters, Marge's age changes to serve the story. 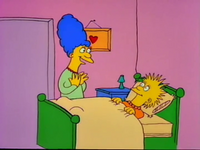 The first appearances of Marge and Lisa Simpson in "Good Night", a short from The Tracey Ullman Show.

Matt Groening first conceived the Simpson family in the lobby of James L. Brooks' office. He had been called in to pitch a series of animated shorts, and intended to present his Life in Hell series. When he realized animating Life in Hell would require him to rescind publication rights for his life's work, Groening decided to go in another direction. He hurriedly sketched out his version of a dysfunctional family, and named the characters after various members of his own family, with Marge being the name of his mother. Marge made her debut with the rest of the Simpsons clan on 19 April 1987 in the Tracey Ullman short "Good Night".[34]

In The Simpsons Season Four DVD commentary, Matt Groening states the original idea behind Marge's hair was to conceal large rabbit ears. The gag was intended to be revealed in the final episode of the series, but was scrapped early on due to inconsistencies.[35]

Julie Kavner received a Primetime Emmy Award in 1992 for voicing Marge in the episode "I Married Marge".[36] In 2004, Kavner and Dan Castellaneta (the voice of Homer) won a Young Artist Award for "Most Popular Mom & Dad in a TV Series".[37] For her performance in The Simpsons Movie, Kavner received a nomination for "Best Voice Acting in an Animated Feature" at the 2007 Annie Awards, but lost to Ian Holm in Ratatouille.[38][39] Kavner's emotional performance in the movie got positive reviews and one critic said she "gave what must be the most heartfelt performance ever".[40]

Marge is featured in much Simpsons-related merchandise, including T-shirts, baseball caps, stickers, cardboard stand-ups, refrigerator magnets, key rings, buttons, dolls, posters and figurines. She appeared in all of The Simpsons video games, including The Simpsons Game. Besides the television series, Marge regularly appears in issues of Simpsons Comics. Marge also plays a role in The Simpsons Ride, at Universal Studios Florida and Hollywood. 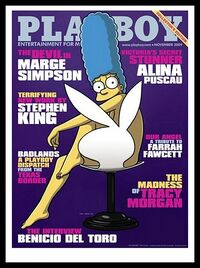 In October 2009, it was announced Marge would be featured on the front cover of the November issue of Playboy. The edition was first published on October 16, 2009. The cover and a three-page picture spread, as well as a story inside entitled The Devil in Marge Simpson, is a celebration of the 20th anniversary of The Simpsons, but is also part of a plan to appeal to younger readers. Chief executive of Playboy Enterprises, Scott Flanders, said the cover and centerfold were "somewhat tongue-in-cheek".

Marge originally said she was born on the same day as Randy Quaid, October 1.[42] However, Lisa showed a calendar saying her birthday was on March 19.[6] The latter was proven true at the 2015 San Francisco Comic-Con.