Mr. Pinchy, or just Pinchy, was a lobster that was Homer's pet. Homer found him at a grocery store and decided to take him home to fatten up to eat. 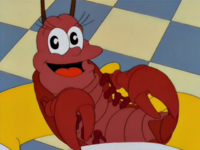 Homer gradually grew emotionally attached to the lobster and decided to keep him as a pet, even naming him "Mr. Pinchy". He kept him in the fish tank, then an indoor wading pool. Marge wanted Homer to get rid of him by cooking him up, but Homer kept seeing Pinchy as a helpless, "little guy" whereas through Marge's eyes, Pinchy looked like a normal vicious lobster.

At the end of the episode Homer told Marge that he placed Pinchy in a hot bath after he got dirty from chasing birds. Bart then commented on the smell of something cooking that entered the room. Homer then put two and two together and realized that it's coming from the bath. The episode then concludes with Homer distraught at the dinner table, sobbing while eating Pinchy, who had been unfortunately boiled alive in the tub.

He is the boss of the Superheroes 2 event, cloned by the evil Dr. Crab to be his weapon against the heroes. He is fought by the heroes, till Homer deals the final blow, killing him, once again, and eating him at the Dead Lobster.