Milhouse Mussolini[6] Van Houten (born July 4[7]) is Bart Simpson's best friend. As the only child of Kirk and Luann Van Houten, Milhouse's most distinctive physical traits are his extreme nearsightedness (depicted by very small eyes), requiring thick glasses to correct, and a bulbous potato-shaped nose. Milhouse has his mother's coloring (blue hair) but not her vivacity or confidence, and shares his father's generally milquetoast and defeated demeanor, although Milhouse sometimes gets cocky and overconfident, raising his eyebrows lasciviously, usually while trying to woo Lisa. 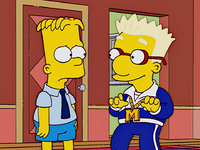 Milhouse is of Dutch and Italian descent. Milhouse is constantly victimized in some form or another such as being the target of the bullies Jimbo, Dolph and Kearney. They often inflict extreme acts of physical violence upon him. One instance had the bullies wrapping Milhouse in bumper stickers and placing him in a shopping cart, the bullies then pushed the cart with Milhouse inside down a very steep hill.[8] He frequently visited a female psychiatrist called Dr. Waxler until she got fed up by his frequent callings. Milhouse is also the subject of Nelson's cruelty: "stop (hitting, zapping, etc.) yourself." He still uses a child-size car seat and is a bed-wetter.

On one occasion, Bart got Milhouse placed on the America's Most Wanted list, even though they are friends, and he once tried to lure Milhouse into a cactus. This kind of torture is often used by Bart, who tries either to get Milhouse in trouble or to hurt him for no reason, making Milhouse's and Bart's relationship even more questionable. Bart once introduced Milhouse and attempted to explain why they are friends. He cannot come up with a real answer and admits that it is due to geographical reasons, though Bart has admitted that he really loves Milhouse.[9] Homer often calls Milhouse a "doofus" or refers to him as "that little wiener Milhouse". Homer also called Kirk Van Houten a "weirdo" and once emailed him to "pick up your weirdo kid". Bart does genuinely care for Milhouse, despite victimizing him on many occasions. Milhouse often does bad things under Bart's influence, like dropping mustard on cars from the top of a bridge[10] and destroying the school by loosening all the screws.[11] This is the reason his mother, Luann, at one point didn't want Milhouse to see Bart anymore, but later changed her mind after Marge talked to her.[12]

However, when his parents were presumed lost at sea (they were later found safe) during their second honeymoon, Milhouse acquired a somber gravitas. The kids at school were impressed, even Nelson, who forewent giving Milhouse his scheduled wedgie. Bart brought Milhouse's uncle, Norbert to Springfield to console Milhouse. Once Milhouse was no longer (believed to be) an orphan, however, the dignified gravitas disappeared and the other kids went back to treating him as before.[9] Later, when his he and his mother moved to Capital City, he dyed his hair blond, wore loud clothing, and treated the visiting Bart poorly to impress his new city friends. He even gave Bart a wedgie (Bart allowed it). Later his father won a judgment requiring Milhouse to be returned to Springfield.[13] 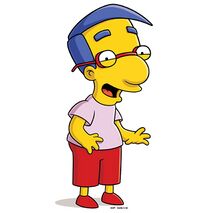 Lisa identified Milhouse as representing "The Dependable Sidekick" among The 20 Types of People You Meet in Elementary School.[14]

Milhouse harbors a hopeless crush on Bart's younger sister, Lisa, and he is usually clumsy around females. However, in a flashback, when Bart and Milhouse were in kindergarten, the school principal accidentally revealed that he had assessed Milhouse to be gay.[15] On occasion he has been shown to enjoy cross-dressing (in one episode, he convinces Bart to dress up with him too) and noticed a boy, named Deven Woosterfield, to be beautiful.[16]

Milhouse has exhibited a tendency to act feminine, complete with dress, clichéd catchphrases and mannerisms, usually in some sort of misguided or out-of-control shenanigans, luring Bart, on at least one occasion, to dress likewise. His lies and social anxiety have cost him Lisa's affection three times, as well as a relationship with Rainier Wolfcastle's daughter Greta. Examples of such behavior are referring to himself as a "big sister" and being caught with a scrunchie in his hair.[17] Milhouse may have a crush on Marge, implied when Bart asked him if he's in love with her. Additionally, upon being asked whether he thinks that Marge is cool, he immediately, without thinking, responds, "No, I think she's HOT!"[18]

Lisa once showed concern for Milhouse when he was beaten by Nelson and left in a heap, and tended to him. However, she soon became distracted by the arrival of Irish environmentalist Colin, who became her love interest. When the Trappuccino finished, Milhouse lied to Lisa about Colin's death and claimed he begged Milhouse to look after her. Colin returned in the middle of Milhouse's story, and Milhouse quickly took his leave.[19] 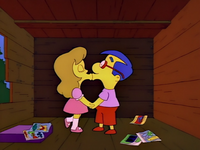 Milhouse and Samantha kissing
After her father caught her and Milhouse kissing, he sent her to all-girls Saint Sebastian's School for Wicked Girls.[20] While Milhouse's official first kiss was with Samantha, it was contradicted when Milhouse claims his first kiss was with Homer during a game of spin the bottle that Homer interrupted by going up the treehouse and accidentally kissing Milhouse (much to Homer's disgust, but to Milhouse' glad for being his first kiss).[21]

Milhouse was seen making out with Paris Texan, who is nearly 20. This may be due to Milhouse wearing cool clothes at the moment.[22] Milhouse have also date Taffy, and Lisa began to follow the. After a while, realized Taffy to Milhouse will always be in love with Lisa and broke up the relationship. Lisa then decided to kiss him for the first time but explained that she does not yet know if she loves him.[23] Although Lisa pointed out in a previous episode that she kissed Milhouse.[24]

Milhouse is fluent in Italian from visiting his Anglophobic grandmother, Nana Sophie, in Tuscany for two weeks every year. His grandmother's beatings when he spoke English left Milhouse both fluent in Italian and a bed-wetter. He demonstrated once that he is a skilled Vespa rider, although he is obviously not legally entitled to operate a scooter on public roads. He came closest to successfully wooing Lisa when he taught Italian to her, as she even kept a picture of Milhouse in her room while practicing Italian, but his lies and bragging ruined it, and at the end of the episode Lisa was seen chasing Milhouse in fury, just as his grandmother was shown chasing after him whenever he spoke English.[6] 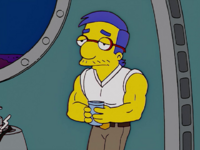 According to a future-telling machine invented by Professor Frink, at age 14 Milhouse burns down a house but rescues Lisa from it. By the time he is 18, Milhouse is rather steroidally-looking buff but emotionally unstable. He dates Lisa but she breaks up with him, sending him on a violent rampage similar to Hulk, probably due to the steroids. When the two nearly get back together, Bart rescues Lisa, fearing it will ruin her life.[25]

A few years later, Milhouse (having lost the "Hulk"ish physique), asks Lisa to marry him. She declines because she intends to never marry. At age 25, Milhouse is balding and works as Homer's supervisor at the Springfield Nuclear Power Plant. He abuses the position to mistreat Homer when learns that Lisa is engaged to another man, although ultimately the engagement does not last.[26] At age 40, he marries Lisa; the two have a teenage daughter, Zia.[27]

Due to Milhouse's resemblance to the character Paul Pfeiffer from The Wonder Years, there was a long-standing rumor among Simpsons fans that Milhouse's appearance had been based on Paul. However, the resemblance appears to be only a coincidence. Producer/director David Silverman disclaimed the rumored Milhouse/Paul connection in a discussion on Twitter in 2011, first saying that "Wonder Years never came up" in the process of designing Milhouse's appearance.[29] Later in the discussion, he said, "Wonder Years Schmonder Years. Nerdy kid w glasses, big nose, & severe hair = a common stereotype."[30]