Frankin A. "Frank" "Grimey" Grimes, Sr., commonly referred to by Homer, much to Frank's annoyance, as "Grimey", was an employee at the Springfield Nuclear Power Plant and the self-declared enemy of Homer Simpson. Frank Grimes was a hard worker, who had to earn everything the hard way. He was also easily frustrated, grumpy, but seemed reasonably tempered. 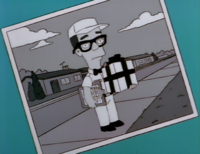 A young Frank Grimes when he was a delivery boy.

Frank Grimes was abandoned by his family at the tender age of four, and thus "never got to go to school." He spent the remainder of his childhood working as a delivery boy, presenting gifts to children from wealthy, loving families.

On his eighteenth birthday, Frank Grimes was severely injured when a silo he was in exploded. No information states what he was doing in the silo, nor how it exploded. He is simply seen running toward the silo, which then erupts. His recovery was long and painful.

Frank Grimes worked long and hard consistently, and what few spare moments he had, he used to study science by mail. His long years of toil and suffering appear to have left him rather bitter and excessively resentful.

Frank received a degree in nuclear physics from a correspondence college (which a bird attempted to steal from him when it arrived). A week later, he was featured in an episode of "Kent's People", which highlighted his lifelong determination; Mr. Burns saw the report and insisted that Frank be hired to work at the Power Plant as Executive Vice President.

Frank Grimes never married, but he "happened to like hookers." One of them became pregnant and had a son, Frank Grimes, Jr.. When he grew up, he became a mechanic and went by the nickname "Junior".[2]

Job at the Springfield Power Plant[edit]

By the time Frank Grimes arrived, Mr. Burns had wanted to give the position to a dog he saw on "Kent's People" having forgotten all about Frank and said that he should be "put somewhere out of the way." His exact role at the plant is unknown, however according to a chart in Burns' office, Grimes had a higher position than Lenny, Carl and Homer.[3]

Frank took an instant dislike to Homer, finding him dangerous and idiotic. Strangely enough, Homer took a shine to him, even giving him the nickname "Grimey" (which he thinks Frank liked, when in fact Frank Grimes despised the moniker). After Homer unintentionally blamed Frank for an accident involving spilled acid, he told Homer that they would be mortal enemies from that point on.

Homer tried to patch things up by inviting Frank to dinner at his house. He arranged everything to be perfect (much more than usual), telling the neatly-dressed kids to behave and having Marge cook an exuberant amount of lobsters. Unfortunately, it only served to further enrage Frank as he sees Homer's possessions as satisfying yet undeserving for an incompetent person like him. He has had a wonderful life, a polite family, a genius daughter, a beautiful wife, a son who owned a factory (at the time), a dream home, two cars, could afford lobster for dinner, won a Grammy, toured with rockstars, was friends with Gerald Ford, and had even been to space. While Grimes had to struggle for everything all his life, was working two jobs and all he had was his briefcase, his haircut and an apartment wedged between two bowling alleys. He accused Homer of being a "total fraud" who leeched off hard-working people like him, being overly rewarded for a lifetime of sloth and ignorance while he himself had nothing.

"Grimey" also isn't fond of a heroic dog Mr. Burns told Smithers to collect when he presented him to Mr. Burns. During Frank's discipline by Mr. Burns, the dog was continually barking at him angrily. 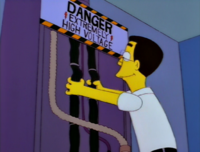 Frank Grimes as he grabs the high voltage wires.

Back at work, in an effort to prove that Homer was an undeserving buffoon, Frank tricked him into entering a nuclear power plant model-building contest for boys. When Homer won the contest, Frank had a mental breakdown. He ran amok through the plant, psychotically impersonating Homer, saying he performs all of his actions because "he's Homer Simpson", and ultimately spotted some high-voltage power cables, claiming that he would not need safety gloves to grab them. When Frank does grab them, he gets violently electrocuted.

Frank Grimes was killed by the wires he had grabbed by electrocution and was buried in Springfield Cemetery. Homer unintentionally managed to make a mockery of the funeral ceremony by falling asleep.

Sometime later, Homer is subject to repeated attempts on his life. It is revealed that these were carried out by Frank Grimes' illegitimate son; Frank Grimes, Jr.. He revealed the previously unknown fact that while his father never married, he did "happen to like hookers", leading the viewer to assume that one of them was his mother. He was trying to avenge his father's death by killing Homer, but ultimately failed and was arrested.[2] 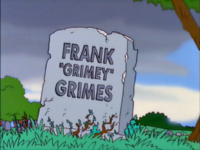 Frank has bushy eyebrows, crew-cut black hair, and yellow skin. He wears a blue-gray suit and a short-sleeved white T-shirt with a black tie and large glasses. He has a rather slim build. 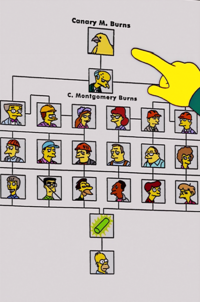 Frank Grimes as he appears in the chain of command during "C.E. D'oh"

"We wanted to do an episode where the thinking was "What if a real life, normal person had to enter Homer's universe and deal with him?" I know this episode is controversial and divisive, but I just love it. It really feels like what would happen if a real, somewhat humorless human had to deal with Homer. There was some talk [on NoHomers.net] about the ending—we just did that because 1. It's really funny and shocking 2. We like the lesson of "sometimes, you just can't win"—the whole Frank Grimes episode is a study in frustration and hence Homer has the last laugh and 3. we wanted to show that in real life, being Homer Simpson could be really dangerous and life threatening, as Frank Grimes sadly learned."
―Josh Weinstein

Grimes received an action figure in the World of Springfield: Series 15 playset.