The Simpsons: A Complete Guide to Our Favorite Family

The Simpsons: A Complete Guide to Our Favorite Family is a book published in 1997 by HarperCollins. It is the first book in The Simpsons Forever! series. It was edited by Ray Richmond and Antonia Coffman; Matt Groening receives credit as the creator of The Simpsons, the television series upon which the book is based, and for an introduction to the book.

Although the title includes the word "Complete," the book is rather an episode-by-episode history of The Simpsons, as the fictional story that appears on television; a non-fictional, behind-the-scenes history of the television show is almost neglected. As it is printed in 1997, only the first eight seasons that had aired by then are covered. Nevertheless, the book is notable as a "definitive guide." If Groening's foreword is to be believed, the book was nearly titled Encyclopedia Simpsonica. 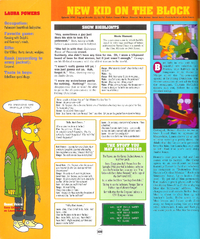 The overview of "New Kid on the Block".

On pages 10–11 are short biographies of each of the five immediate members of the Simpson family, namely Homer, Marge, Bart, Lisa and Maggie. Short biographies of other Simpsons characters are also available as sidebars to each episode's page, starting with Santa's Little Helper for "Simpsons Roasting on an Open Fire" and ending with Willem Dafoe's Commandant from "The Secret War of Lisa Simpson." Each full-length episode receives one-page coverage, or two-page coverage, featuring a synopsis, credits, pictures, and memorable quotes, as well as the episode's blackboard joke. Obscure or hidden jokes are also brought to attention.

The episodes are arranged in chronological order, and at the beginning of each season are two-page special features, such as a list and brief description of the Simpsons shorts, a list of times Homer has cried "D'oh!", and a list of Itchy and Scratchy's cartoons.

As an in-joke, the Guide made an actual appearance in the 2003 episode "Today I Am a Clown", where Lisa uses it to remind Homer that Santa's Little Helper was supposedly neutered in a previous episode. However, the episode proves her information false.

All characters that have appeared in the book are listed below: