Laddie was a collie owned by Bart. 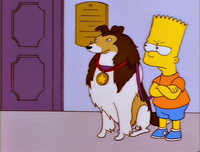 Laddie being awarded a medal.

Bart ordered him from a catalogue using a credit card he obtained through forgery. He was designed to be the ultimate dog, able to use a flushing toilet and perform multiple household chores. His charm quickly won the hearts of the whole family. When Bart's credit card went unpaid, the repo man came to take the dog away. Bart lied and said that Santa's Little Helper was the dog he ordered. Santa's Little Helper was taken to the pound instead of Laddie. Eventually, Bart felt guilty because of that and then decided to give him away to the police force and try to recover Santa's Little Helper.[1]

As a welcome gift he gives new owners fruit as he was trained to do it. He is also a guide dog who helps blind men. He also was watering the lawn when the repo men came to get him.

This section is transcluded from The Simpsons: Tapped Out characters/Dog Days. To edit it, please edit the transcluded page.

Laddie is a parody of Lassie.