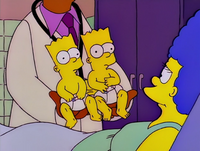 In the video game The Simpsons: Hit & Run, Hugo is one of the character costumes for Bart.