Marion Anthony "Tony" D'Amico, also known as William Williams[2][3] or, more commonly, "Fat Tony", is the Capo of the Springfield Mafia. He has been behind several of Springfield's criminal enterprises. His rackets include illegal gambling, cigarette smuggling, and bootlegging. He has also been seen bribing and making secret deals with Mayor Quimby. 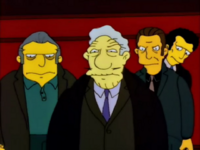 He hands over the Mafia to his accountant, Dan Gillick because he was on jury duty. Tony tried to guide him, although he rushed through it to get to the window seat before the lady that normally gets it. After Gillick fled, Tony resumed control of the mob, but to curb expenses had to limit the entire Springfield Mafia to just one gun, which he kept.[8]

He may have been hired by Homer Simpson to get back loaned money from Bart Simpson.[9] 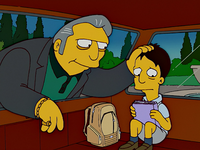 Fat Tony is a widower; he had a wife who was "whacked by natural causes." Tony has a son named Michael, whom he planned to have follow in his footsteps as the leader of the Springfield Mob.[11]

He was once briefly married to Selma Bouvier after they met each other at the DMV. Selma thought that Tony was cheating on her, and called him out on it, but it later turned out that she was the goomar and not the wife.[12]

After he found out that his new "family member" Nicky was a spy, he suffered a heart attack and died. His cousin Fit Tony, who later became known as Fat Tony, took over from him.[13]