Lenny works at the Springfield Nuclear Power Plant alongside Homer Simpson and Carl Carlson. Despite his steady job, Lenny has been featured with several other jobs. On one occasion, he is promoted to head of the power plant when Mr. Burns goes bankrupt; which Smithers later describes to Homer Simpson as a "reign of terror". Homer considers Lenny to be the second richest man he knows. However, Lenny is once shown living in a dilapidated house, and asks Marge to not tell anyone how he lives. In another episode,[8] he is shown living in a fancy, well-furnished modern apartment with hanging on the walls paintings of considerable importance (that they are paintings and not prints can be deduced from the lighting dedicated to them) such as a composition by Mondrian, a part of van Dyke's "portrait of Charles I on the hunt", one of Juan Gris' guitars....but that happens to share a wall with a jai-alai court. In a "future episode", it's shown Lenny is once again in charge of the power plant. On one episode, it is implied he is an undercover agent whose target is Homer. He was also fired from the Nuclear Power Plant at least twice, once as a demonstration to Bart as how he should act as his heir, and the second due to being the last one in the designated cabin in a Company Competition. Also, during an Employee Appreciation Night, he attempted to thank Mr. Burns for the great evening, but his attempt backfired due to his being drunk, which only resulted in terrifying Mr. Burns.

Lenny's best friend is Carl Carlson, as they are rarely seen apart; his other friends are Homer, and regulars at Moe's including Barney Gumble and Moe Szyslak. He met Homer and Moe at summer camp at a young age.[12] On Lenny's birthday, his friends attempted to throw a surprise party for him at Moe's, which is ruined by Homer, who then sits on a cake shaped like Lenny's favorite barstool. Homer repeatedly confuses Lenny and Carl, and is shocked to learn on one occasion that Lenny is white, and Carl is black. To guide himself, Homer has "Lenny = White, Carl = Black" on his hand. He once muttered to himself, "Is that right?" while reading it. Homer once exclaimed, "That's Lenny? I wanted the black one!" [8] When Mr. Burns appears on a radio show in an attempt to boost his popularity,[13] Homer tells him that he has a list of jokes explaining the differences between white and black people; Homer later stated, "White guys have names like Lenny, whereas black guys have names like Carl".

Lenny appears to be well liked by the Simpson family. On one occasion, Marge and the kids built a prayer shrine for him when learning he was taken to the hospital. When Homer went bowling but tells Marge that Lenny was hospitalized; Marge informs the kids, they respond the same way she did and shout, "Not Lenny!".[14] The Simpson family had a cake inscribed "Happy Labor Day Lenny".[15] Marge has a picture of Lenny in her hair.[16] In The Great Louse Detective, Lenny tells Sideshow Bob to kill Bart. It is also shown that Lenny greatly values all his friends when he throws them a lavish party (after winning on a lottery ticket) to celebrate their amity.[17]

Carl once told Seymour Skinner that "Marriage is gonna be great. Now you'll have someone who'll rub your back - without being asked" while glaring at Lenny, who sighed "Oh, not this again." Carl then responds "Yes, this again." When Homer opened a chapel for gay couples after Gay Marriage was legalized, he speculated that Lenny and Carl might be interested, and Marge responds with "Don't you push them - they've gotta work that out for themselves." Once, Chief Wiggum remarked that Lenny's relationship with Carl is on the rocks. While helping Lisa with a science project, Homer quoted to Lisa "You and science go together like Lenny and Carl - the science is Carl".[18] Another time, Lenny and Carl saw Homer and Marge kiss, prompting Lenny to remark, "Remember when we used to kiss like that, Carl...with our respective girlfriends?" They then discuss what happened to them. Apparently one turned out to be a prostitute and one died.[19] In the Simpsons Game, if the player fails to rescue Lenny and Carl in Lisa the Tree Hugger, Carl might say, "Tell Lenny... I loved... his recipe for caramel sundaes."

Lenny's hero worship over Carl has reached a mounting point. Lenny revealed that he carved Carl's face on a mountain, and called it Mount Carlmore.[5] He later leaves a burning oil field, only because Carl arrived. On one occasion, the residents of Springfield see the stars, and see deep within their hearts and souls; Lenny sees Carl's face in the stars (Carl also sees himself there). Lenny published a newspaper called The Lenny-Saver with the headline: "The Truth About Carl: He's Great." After displaying this, he shedded a tear and stated that "it had to be told." Lenny and Carl were once pictured driving a sports car through the woods with two children in the back of contrasting background (either noting they are both single parents have separately or otherwise adopted children.)[20] Carl Carlson states that he and Lenny have the same mother when a major fire is closing in on her work.[21]

Lenny is apparently divorced - Carl says that he sang "The Best Is Yet to Come" at Lenny's wedding,[22] although it was later shown that Lenny punched Carl for giving a bad speech at his wedding. Lenny is a persistent bachelor who has poor luck with women. Lenny once shaved the legs of a woman who calls him an idiot for not shaving in an upward direction.[23] Homer mentioned to Moe that both Lenny and Carl are with their mistresses.[24] In yet another occasion, he was seen in the opening scene with his arm around a woman who appears to be his girlfriend.[25] It's revealed that he had dated a woman in a Woody Woodpecker outfit at a fairground for three months until she left him for the man who cleans the vomit on the roller coaster.[26] Lenny had told Carl that he was married to a Beauty-Queen, but it is later revealed that Lenny made his Beauty-Queen wife up, and is unmarried.[27] Lenny is one of many men who had a relationship with Edna Krabappel.[28]

When Professor Frink matched up Springfield's bachelors to a bachelorette, Lenny was paired with Lindsey Naegle.[29] 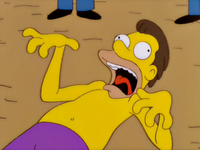 At age 53, Lenny owns a super pet. When Milhouse (with giant muscles) gets trapped between two trees, he and Carl leave him there. In Homer's dream in "The Wizard of Evergreen Terrace", Lenny is shown at Homer's funeral as president and when Homer wakes up, he asks Marge not to vote for him.

It is known that Lenny has eye problems.[30]