Jack Black is an American actor, comedian, musician, and songwriter. 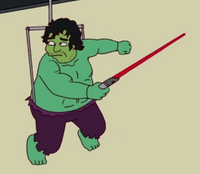 Jack Black as the Hulk

He and Ben Stiller were dressed up in Marvel superhero costumes (Black as the Hulk and Stiller as Iron Man), suspended from wires fighting with light sabers. Lots of people disliked this act and wanted it to end.[1]