"In many ways, Maude Flanders was a supporting character in our lives. She didn't grab our attention with memorable catchphrases, or comical accents. But, whether you noticed her or not, Maude was always there ... and we thought she always would be."
―Reverend Timothy Lovejoy at Maude's funeral[src]

Maude Flanders was the wife of Ned Flanders, and the mother of Rod and Todd. Maude was a woman with many positive qualities: faith, chastity, charity. She also loved to draw, which was discovered when Ned found her sketch pad after her death.[3]

Maude Flanders was a devout Christian who once attended a Bible camp to learn how to be more judgmental.[4] Maude was often partnered with Helen Lovejoy as they protested against the "evils" in Springfield, and she campaigned strongly against Itchy and Scratchy with Marge.[5] Maude died after she was knocked off a grandstand at the Springfield Speedway in a tee-shirt cannon accident.[6] 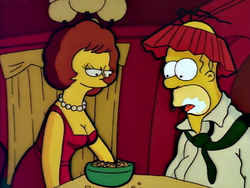 Inebriated Homer leering at Maude's cleavage in "The War of the Simpsons".

First meeting with the SimpsonsEdit 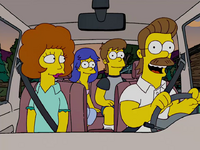 Ned and Maude met Homer and Marge after their wedding. Ned and Maude Flanders, who were driving by, noticed them as hitchhikers and picked them up. Ned and Maude shocked Homer and Marge by revealing them that they're married (since 2:00 pm that day). Ned attempted to convince Homer not to have any sexual activities with Marge, much to Homer's discomfort. That night, Maude seduced Ned wearing the clothes of her late grandmother.[7]

Six years ago, Ned proposed Homer to go on a brunch with his wife, leaving Grandma Flanders with all their kids. Homer accepted. At the restaurant, Ned and Maude were waiting for Homer and Marge, but Maude was furious because Ned only accepted water to drink and Maude needed to go to toilet.[8] Maude was a busy homemaker and a devoted wife and mother. She was also a tireless advocate for children in general, whose innocence, she felt, was often sullied by the "evils" of cartoon violence, liberal education and the insidious influences of popular culture.

Maude and Ned attended the weekend marriage counseling retreat, as they were working on fine-tuning some issues in their marriage. The main one, according to Ned, was that sometimes Maude would underline passages in Ned's Bible when she couldn't find her own.[9]

Even though she spent much of her free time in prayer and reading the Bible, Maude was known to let her hair (and her neckline) down for the occasional dinner party at the home of her neighbors, the Simpsons.[9][10] Homer has repeatedly demonstrated his lust for Maude,[4][9][11][12][13][14][15] even going so far as to convince himself that she also "has a thing for me" although he did acknowledge that she was good at hiding it "behind a mask of low-key hostility.[12] Moe was also attracted to her.[6]

Maude and her mother were briefly held prisoner by militants while visiting the Holy Land.[17]

She was once seen on one of Mr. Burns' surveillance monitors eating an entire tub of ice cream.[18]

Maude is hit by the T-shirts

Maude died after being knocked off a grandstand by a T-shirt cannon barrage from the cheerleader group Fan-Demonium at the Springfield Speedway, an incident that was both precipitated and exacerbated by Homer Simpson. Homer loudly insisted that the T-shirt girls give him a shirt, to the point of taking off his own shirt and painting a target on himself with ketchup while he continued to taunt them. The girls responded by firing their cannons at him en masse. However, Homer ducked out of the way at the last second (being distracted by a bobby pin) and the shirts hit Maude instead. Because she was in the back row, the impact knocked her off of the grandstand and she fell to her death. Homer later admitted to Ned that he had "provoked the lethal barrage of T-shirts" and also that he had parked in the ambulance zone, preventing any possibility of resuscitation.[6]

Maude's death was a crushing blow to Ned Flanders (as well as Todd and Rod), who, though used to some measure of hardship (their house getting destroyed [19] and car crashes among them), assumed that they would always be together.[6]

At Maude's memorial service, Homer apparently fell in her grave, which Ned later mentioned.[20] Reverend Lovejoy eulogized her as follows: "In many ways, Maude Flanders was a supporting character in our lives. She didn't grab our attention with memorable catchphrases, or comical accents. But, whether you noticed her or not, Maude was always there ... and we thought she always would be."[6]

After Maude's death, the grieving Ned saw in her sketchbook a series of drawings that outlined a plan for a Christian-themed amusement park named "Praiseland". Realizing this park to be her final dream, Ned acquired the defunct amusement park "Storytime Village" from Colonel Antoine "Tex" O'Hara ("The Rich Texan") and, with the assistance of Homer and other townspeople, built and opened Praiseland. He memorialized Maude there with a statue of her, and placed on its base a plaque bearing the phrase "She taught us the joy of shame and the shame of joy." Praiseland sold Maude memorial items such as masks. Praiseland gained popularity among the residents of Springfield when they erroneously attributed to the statue of Maude the performance of miracles providing religious experiences. The religious experiences were actually hallucinations, caused by gas that was leaking from a gas line near the base of the statue. Feeling that profiting off the memory of his dead wife was wrong, and even more so after candles near the gas leak nearly caused an explosion, Ned closed down Praiseland.[3]

In a coma dream that Bart had, Maude was one of the ghosts who came to Bart to get help to move on to the afterlife. Bart put off helping her for ages, waiting until Maude was the last ghost left. Maude then asked Bart to get revenge on Homer as she blamed him for her death. Bart then arranged for the bullies, dressed in masks, to shoot at Homer with T-shirt cannons, which killed him. Maude then moved on to Heaven, only for Bart to tell her that Ned remarried after she died.[21]

Artwork of Maude Flanders' ghost from The Simpsons: Tapped Out

After Maude died, the Simpson family and Ned Flanders held a séance in order to contact her. While everyone joined hands around the table and concentrated to summon Maude's spirit, Bart snuck into the room dressed in a wig and women's clothing to prank Ned by pretending to be Maude. The prank turned out to be a dud, and it backfired when Maude's real ghost appeared behind Bart, startling everyone. Homer and Ned admired Maude, but Homer's admiration quickly turned lascivious. Maude's ghost then became angry and turned into a hideous ghoul, which terrified everyone except Lisa, who, oddly, wasn't afraid of the ghost's demonic appearance.[15]

Maude appears as the lover of the Devil, and says "Honey, come back to bed.". She is quite likely his wife, as she herself has a tail.[22]

Thirty years into the future, Ned had apparently gotten remarried to Maude's ghost after Homer had accidentally killed Edna. Maude's ghost insisted that there was no God, but merely an empty void. Ned however, refused to hear the idea and dismissed it by laughing her off.[23]

This section is transcluded from The Simpsons: Tapped Out characters/Flanders Family. To edit it, please edit the transcluded page.

An action figure of Maude was planned for series 17 of the World of Springfield toyline; however, it was cancelled when the series came to an end. A picture of her was included as an accessory with Rod and Todd.