"Look, Smithers -- a creature of pure malevolence. He's the perfect one to suckle at my proverbial teat."
―Charles Montgomery Burns

"Burns' Heir" is the eighteenth episode of Season 5 of The Simpsons and the ninety-ninth episode overall. It originally aired on April 14, 1994. The episode was written by Jace Richdale and directed by Mark Kirkland. It guest stars Phil Hartman as Lionel Hutz.

"Nearly drowning in the bathtub, Mr. Burns decides to find an heir. He sees it in the form of Bart Simpson and coerces the young Simpson into staying with him."

After nearly drowning in the tub, Mr. Burns realizes that if he had died, there would be no one to look over his power plant, so he decides to hold tryouts for local kids to be his heir. Mr. Burns rejects Bart in a special way, by using a machine to kick him in the butt. He gets revenge on him by smashing his windows, breaking his statues, and filling his car with water. Mr. Burns notices his evilness and makes him his heir. 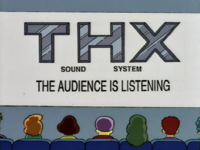 Homer eagerly accepts, though Marge feels that since Bart will be inheriting Mr. Burns' money, he should spend some time with him. Bart does, reveling in Burns' lavish lifestyle, and even getting a pizza delivered by Krusty the Klown. Once he returns to his family's lifestyle, Bart grows upset that he can't get his way all the time, and returns to Mr. Burns. The family tries to get Bart back, but both the Police and attorney Lionel Hutz prove to be no use. Their attempt to get a P.I. to help results in Hans Moleman being brainwashed into thinking he's the Simpsons' son.

Bart starts to feel lonely from the lack of fun, and wants to go back to his family. However, Mr. Burns shows Bart a video revealing that his family no longer cares about him—even though the Simpson family members in the recording are obviously actors hired by Mr. Burns to portray negative versions of them. Bart slowly grows to like Mr. Burns even more, and is invited to the Power Plant to fire employees. Bart finds this little game fun, until he is told to fire Homer. Bart refuses, and instead attempts to fire Mr. Burns. This backlash causes Burns to claim that Bart can never be his heir or son. Bart is then reunited with the Simpson family, who reveal Burns' earlier deception with the actors since they spent time with the actual Simpson family members to get their characters down. Marge makes the point that the real Simpson family members truly missed Bart, and Homer introduces Bart to his new brother Hans Moleman, whom Marge wants out of the house.

In "The Simpsons 138th Episode Spectacular", a deleted scene that was supposed to be in "Burns' Heir" was shown. When Homer turns up to Burns Manor asking for Bart, Mr. Burns deploys a robotic Richard Simmons. Homer runs away and the robot goes haywire, Singing Shake,Shake Shake. Waylon Smithers, Jr. tries to shoot it but to no effect, and Mr. Burns, Smithers and Bart take cover in the mansion before it explodes.