The greyhound puppies is the first litter of puppies that Santa's Little Helper had fathered. The mother was She's the Fastest. 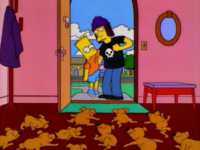 The first litter of puppies were born in the Simpsons kitchen in several hours and each had their own personalized bowl. They enjoyed ripping Bart's socks to pieces, until he had to resort to wearing Lisa's socks. They also enjoyed stealing potato chips out of Homer's hands before he could eat them. Marge made the family wear flea collars because of the puppies since "it's just easier that way". They went to the bathroom on newspapers in the kitchen, and Homer just put new newspapers over the old ones, causing the house to stink.

The family decided to give the puppies away after they blew their second chance, getting Homer into trouble with the IRS, US Army, and Reverend Lovejoy at a dinner party. The next day, Homer put up a sign that said "Puppies for free (or best offer)" and attempted to sell them to neighbors, but the puppies didn't like being split up. Mr. Burns offered to take all of them, but the family refused. When the family was looking away, Burns and Smithers kidnapped them all. 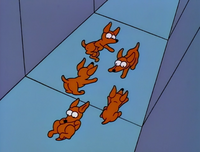 Some of the puppies escaping from Burns through the garbage chute.

They were taken to Burns' manor after being kidnapped. One of them stood up, which reminded him of Rory Calhoun, and he named it Little Monty. Bart and Lisa found out where the puppies where and discovered Mr. Burns giving them a bath. They thought that they might have been wrong, until hearing plan to make them into a tuxedo. Bart and Lisa attempted to rescue the puppies, but were stopped by Burns in the basement. He was about to kill the dogs, except for Little Monty, who stood up and Burns knew who not to shoot. Then, Bart used a clothesline with Burns' socks hanging from it to get all of the puppies to stand up. Mr. Burns was almost going to kill them all, but couldn't since they were too cute.