Otto Mann is the Springfield Elementary bus driver. He enjoys playing guitar and calls almost everyone "dude". One of Otto's recurring passenger is Bart, whom he often calls "Lil' Bart Dude." He has long black hair, and wears a light pink short-sleeved shirt and purple shorts. He also wears an orange hat with headphones on. He loves heavy metal and classic rock.

Otto is notable for his maniacal driving style, his love of heavy metal music, and his propensity for sounding and acting like a perpetual 1980s teenager. According to his drivers license, he was born on January 18, 1963. Otto also attended Brown University, where he graduated Sigma, taught briefly and almost received tenure.

He was placed under suspension at least twice: Once after he not only crashed a School Bus full of kids for the 15th time, but was also revealed to not possess a drivers license[1] and another time when, out of fury that Bart stole the bus (and thus cost him his one and only chance of proving himself to Metallica by giving them a ride), spanked him "for every Bus Driver, Teacher, Lunchlady, etc." and getting caught by Principal Skinner (as he wasn't supposed to deal Corporal Punishment on kids).[4]

He has been seen at Alcoholics Anonymous meetings: "My name is Otto, and I love to get blotto!".

Both he and Krusty were already student council presidents when they were students at Springfield Elementary School.[5]

Otto is a drug addict, and has been seen smoking Marijuana [6][7] and during Trappuccino, he used a bong.[8] It has been implied that Otto used other drugs like heroin and LSD. He once had a hallucination in which his shoes were talking to him as a result of his drug abuse.[9] Also, at one point, he was apparently driving the bus while on Narcotics, wondering if Metallica was indeed the real Metallica with their tour bus broken down, until a narcotic-induced hallucination of a dragon confirmed he wasn't seeing things in regards to Metallica.[4] Otto once submitted a urine sample as part of an application for a job as a prison guard, which contained "crack, smack, uppers, downers, outers, inners, horse tranquilizers, cow paralyzers, blue bombers, green goofers, yellow submarines" and "LSD Mach 3". However, he got the job anyway because he swapped the labels on his urine sample and Homer Simpson's.[10] 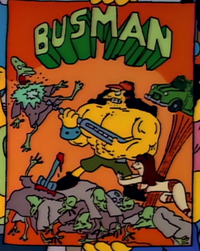 Busman, a superhero created by Otto.

Otto has a huge passion for rock music, being very skillful at playing the guitar (saying that it was the only thing he did in high school).[1] Otto's favorite songs include "Iron Man" by Black Sabbath, "Dazed and Confused" by Led Zeppelin, "Frankenstein" by The Edgar Winter Group, "Freebird" by Lynyrd Skynyrd, "Every Rose Has Its Thorn" by Poison, "Purple Haze" by The Jimi Hendrix Experience and "We're an American Band" by Grand Funk Railroad. He claims that music is about far off lands (Immigrant Song), deals with the devil (The Devil Went Down to Georgia) and smoke in relation to water (Smoke on the Water) He also likes Metallica, which is referenced several times, but he doesn't state particular songs. He once actually met the band after driving past their broken tour bus. Otto apparently saved Kirk Hammett from quitting the band after seeing his lighter in a concert at Springfield Arena in 1997. When he tried to offer Metallica a ride, Bart drove off with the school bus.[4] He also once mistook a line at the Post Office set up for tax day for a Metallica concert, and didn't realize his mistake until after Kent Brockman asked him why he waited until the last minute to file his tax returns.[11] At a mock-medieval fair at the school, Otto played a lute solo in the style of Jimi Hendrix's guitar solos. He put the lute behind his head to play it, smashed it, and then lit the remains on fire on the floor (just as Hendrix did on June 18, 1967 at the Monterey Pop Festival).[12] Otto was engaged to be married and plays "Every Rose Has Its Thorn" by Poison while proposing to Becky, but when forced to choose between his fiancée and his music, he prefers his music, jilting her at the altar.[2]

Otto is also implied to be a comic book fan, and even has an artistic side. He even created and designed a superhero named Busman, a man who drives a school bus by day and fights vampires in a post-apocalyptic warzone by night. He went to a comic book convention to present the idea to "Jolly" Jack Tate, and it's unknown what came of it.[13]

He is often found homeless, having been evicted from his apartment and once forced to live with the Simpsons house.[1] He was once found squatting in the Simpsons' recently-vacated home after the family moved to Cypress Creek.[14]

He has been seen with Princess Kashmir on a few occasions[15][16] and attended Artie Ziff's fake prom recreation with Miss Hoover.[17]

Otto had sex with Agnes Skinner at the Simpsons' Mardi gra party.[18]

He also once hooked up with Luann Van Houten.[19]

Lisa identified Otto as representing "The Burnout" among The 20 Types of People You Meet in Elementary School.[20]

He was seen on a date with Lindsey Naegle, however this was within Marge's dream so it's unknown whether they have ever actually dated.[21]

During "grownup Halloween" he got together with Cookie Kwan.[22]

Otto's ability and competence to drive any kind of vehicle, let alone a school bus, is highly questionable. Otto does not seem to have any respect for the rules of the road, although on one occasion he told Bart that state law disallowed him from intentionally crashing the bus. This showed that Otto at least had some common sense, or a clear desire not to go out of his way to cause trouble and put children in danger. He once told Principal Skinner that he has a record of crashing his school bus 15 times without a single fatality (although whether he had indeed achieved it without fatalities is questionable, as it was implied that he killed Spinal Tap when he demolished their tour bus when he was rushing to school).[1] He was dismissed from his job when the authorities discovered that he did not hold any kind of license, or any kind of identification at all (he stated that his identification was the fact that he wrote his name on his underwear, only to discover that he was wearing someone else's). He only attained his driving license thereafter because Patty passed him, and this was despite him completely failing to drive the bus in a restrained and secure manner (she passed him because they shared a mutual hatred of Homer, although Otto's license had a "PROBATIONARY" stamp on it). Otto has also been shown smoking or being under the influence of marijuana while driving the bus many times.

At one time, Otto crashed the bus full of children into the ocean (in this particular instance, it isn't his fault; he has grapefruit citric acid in his eyes that was caused by Milhouse rolling a grapefruit down the passenger aisle before it became stuck between the brakes.), leaving his passengers to be washed up on an exotic island. Otto himself was seemingly rescued by a Chinese fishing trawler, unaware that its crew was actually planning to enslave him below decks.[23] He once accidentally drove his bus into an auto wrecking yard, crushing it into a scale model of the bus.[9] Otto once got the bus stuck onto a rail road track and whilst jamming to rock music, the bus is struck by an oncoming train.[24]

Otto's father is a navy admiral, and the two do not get along (Jim Morrison's father was also a naval admiral who was estranged from his son). His father warned Otto that if he spent all day playing his guitar, his life would amount to nothing. He was once engaged to a girl named Becky, but at the wedding she revealed she couldn't stand heavy metal after he hired a Poison cover band to play at the ceremony. Marge then told him he had to choose between Becky and his music - he chose the latter, leaving Becky at the altar. In other episodes Otto has made reference to a girlfriend named Crystal, though this could be a joke about crystal meth.

In "Lisa's Wedding", he apparently retired from being a Bus Driver and founded a Taxi service business in Springfield. Otto himself appeared on a video screen in "Muhammad Jafar's" cab when he was driving Lisa Simpson and Hugh Parkfield to 742 Evergreen Terrace to tell him, while addressing him by his real name that after doing the fare, he should "get his indicted ass to the convention center pronto!" In 24 Minutes, he drives his bus into a railroad track, either seriously injuring or killing him.

Otto first appears in the level Around the World in 80 Bites as a contestant in the Duff Ultimate Eating Challenge. He later appears in the form of a ghostly skeleton that attacks Homer, Marge, and their army of Hobbit-like children in NeverQuest.

This section is transcluded from The Simpsons: Tapped Out characters/Homerpalooza Rock 2017. To edit it, please edit the transcluded page.