Chalmers originally hails from Utica, New York,[5] but has also said that he comes from Queens, New York and Intercourse, Pennsylvania. He attended Ball State University and is a proud owner of a red 1979 Honda Accord (and later, a Camry, which Otto Mann promptly wrecks). He mentioned to Principal Skinner that he is a Sagittarius (b. November 22-December 22).[6]

Chalmers is a strict, no-nonsense, and largely humorless man, with a short temper and low tolerance for disorder or rule-breaking. His general demeanor and personality are like those of a military officer. Whenever he visits Springfield Elementary, some sort of disaster strikes. He produces extreme anxiety in Principal Skinner, who offers increasingly improbable stories to explain what is happening. Chalmers is known for throwing open the doors to the room and bellowing "SKINNER!!!" or "SEYMOUR!!!", to which Seymour's usual response is to stammer "S-Superintendent Chalmers!" Evidently, Chalmers' trademark bellowed catchphrase has caused some paranoia in Skinner.[7] 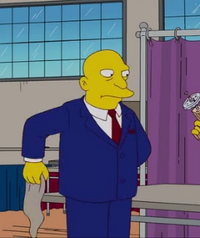 When Springfield began erecting surveillance cameras around Springfield and 742 Evergreen Terrace was discovered to be a blind spot and transformed into a crowding place for rebellious activity, Superintendent Chalmers was spotted swinging nunchucks while prancing in a Tutu.[8]

Chalmers once dated Agnes Skinner, much to Skinner's dismay[9] (although on other occasions he has mentioned being married). Later, it is revealed that Chalmers is a widower and his wife's name was Rosemary.[3]

Skinner once received a note by Bart's carrier pigeon stating that Chalmers and Edna Krabappel were "doing it", after Skinner read it, Chalmers backed out of the room awkwardly and claimed she was on the rebound from Groundskeeper Willie.[10] Chalmers also once said that he was dating the mother of one of the Springfield Elementary band students.[11]

He hooked-up with Brunella Pommelhorst during "Grownup Halloween".[12]

In one possible future, Chalmers is practically a vegetable, wheelchair-bound and only capable of saying his trademark line: "Skinner!"[13]

In another possible future, Chalmers is a colonel of an army that he leads on the planet Rigel 7 to fight the Rigellians, to get Hillarium, a liquid that makes everything funny. He is defeated after Bart makes Chalmers slap himself in a large robot suit that he controls by movement, telling him he had something on his face, thus making Chalmers fall off a cliff.[14]

In one comic story he revealed he had been dating Lunchlady Dora.[15] Chalmers and Dora were also seen making out in "Brick Like Me"

This section is transcluded from The Simpsons: Tapped Out characters/Treehouse of Horror XXXII. To edit it, please edit the transcluded page.