Bing Crosby was an American singer and actor. 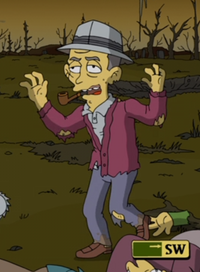 One day in 1956, Crosby's limousine broke down while passing through Springfield, and the crooner spent the afternoon playing mini-golf at Sir Putt-A-Lot's Merrie Olde Fun Centre while his car's Johnson rod was being replaced.[1]

He appeared in A Zombie Christmas with Bing Crosby, Elvis and the 1932 All American Football Team.[4]

A zombie Bill Crosby appeared in a zombie golf game Homer and Bart were playing.[5]