Jesus Christ is the son of God.

When Ned Flanders said he was going to be the nicest man the world had ever seen, he looked at a photo of Jesus hanging on the wall and said "I said 'man', not 'man-God'."[3]

Jesus featured in the comic book Easy to Believe Tales which Comic Book Guy sold to Bart, claiming that Bart smudged it.[4]

God told Homer that his son went down to Earth once, and said, "I don't know what you people did to him, but he's never been the same." God then pointed to Jesus, who was sitting on a slightly spinning swing with a look of grief on his face. He seemed traumatized and depressed.[5]

After Mrs. Glick died, she was seen dancing in Heaven with Jesus.[6]

Ned Flanders showed a picture of Jesus to Homer and his parents to tell them that Jesus is watching them.[7]

When Bart tried to sleep he heard that Ned told his kids that Jesus loves all the children of the world. Rod and Todd then asked Ned if it's true that Jesus even loves Bart Simpson, and if so, doesn't Jesus have to draw the line somewhere?[8]

Whether created by gas fume intoxication or an actual spiritual message, a vision of Jesus appears to be plotting against the Flanders Family while they inhale toxic gas fumes put out by the RVs parked at the Simpsons residence next door.[9]

Jesus was in the mockumentary Jesus Christ Superstorm. Later, he showed up to Homer when he was learning cursive handwriting. He gave Homer a thumbs up.[10]

A statue of Jesus was seen in the Our Lady of Eternity church.[11]

Jesus appeared in a dream Bart had where he told Bart that he was trying very hard to forgive him. Jesus then turned a log into a sign that said "LOVE" and bat Bart up with it. Later, in the film Bart's Not Dead, Jesus told Bart to tell the people what he had witnessed and, if they doubted him, to viciously attack their character.[12]

Jesus was among the other forms that Loki had taken.[13] 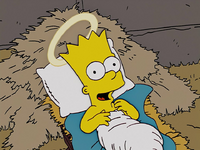 The Simpsons once took part in a re-telling of the Christmas story, with Bart cast as Baby Jesus.[1]

This section is transcluded from The Simpsons: Tapped Out characters/Clash of Creeds: Christmas Royale. To edit it, please edit the transcluded page.

Jesus was the founder of Christianity and one of the most well-known people in the world. It is uncertain when he lived, but many historians believe that Jesus died in the year 33. Jesus is a symbol of the Christian religion and stands for values such as peace and loving one's neighbors.