"I made a pigeon-rat."
―Hugo Simpson

"Treehouse of Horror VII" is the first episode of season 8 of The Simpsons and the one-hundred and fifty-fourth episode overall. It is also the seventh installment in the Treehouse of Horror series and consists of three parts. It originally aired on October 27, 1996. The episode was written by Ken Keeler, Dan Greaney and David S. Cohen and directed by Mike B. Anderson. It guest stars Phil Hartman as Bill Clinton.

In the seventh annual "Treehouse of Horror" episode, Bart discovers his long-lost twin, Lisa grows a colony of small beings, and Kang & Kodos impersonate Bill Clinton and Bob Dole in order to win the 1996 Presidential election. 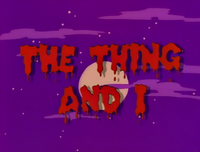 Title card for "The Thing and I" segment.

Bart, Lisa, and Maggie hear strange noises coming from the attic one night. The next morning, after they mention this to their parents, Marge reminds Homer to feed the "thing". The kids spy on Homer climbing to the attic feeding fish heads to something. The kids are still curious as to what this is. And Homer accidentally calls them four children, until Marge covers it up. That night, while Homer and Marge are out, the kids sneak into the attic, where Bart discovers the unsold copies of Homer's auto-biography. They find a shadow, and run out scared. Homer and Marge come home disappointed to find that they entered the attic. When they climb up into the attic, the weird shadow escapes through the door. Marge calls Dr. Hibbert to inform him that Hugo is loose. She then tells Bart that he has a twin brother named Hugo. Dr. Hibbert suddenly appears, scaring Marge, and explains the story of Hugo. When Bart was born, he was a Siamese twin. The only problem was that the left twin, Hugo, was evil. So after they were separated, Homer and Marge decided to chain Hugo up in the attic and feed him fish heads. Bart believes this story when he discovers his scar. Everyone except him exits the house to find Hugo, leaving Bart behind, who knows that Hugo is in the house. He soon realizes that he is right, as Hugo confronts him. Hugo ties him up on a table in the attic planning to sew them back together in hopes of becoming sane again. Before the operation begins, Dr. Hibbert appears and shows Hugo a mirror to see his own face in, but Hugo becomes confused as it has no glass, and Dr. Hibbert punches Hugo in the face, knocking him out. He then notices that Hugo's scar is on the left side. Remembering that the twin on the right was evil, he reveals that Bart was the evil one. So their solution is having Hugo join the family, while Bart lives up in the attic like an outcast. 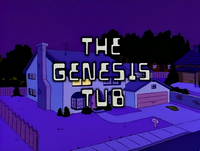 Lisa places a tooth in cola for a school science project. After being shocked by static electricity from Bart, Lisa touches the tooth, and the spark causes life to evolve in the petri dish where the cola and tooth are. In less than a few days, the tiny people have evolved to a futuristic cityscape. However, Bart playfully destroys some of their tiny buildings, causing them to launch a counterattack, sending a small fleet of aerial vehicles to attack him. Bart wants to destroy them for attacking him, but Lisa intervenes. He leaves, threatening that he will get revenge on them. Shortly after this, a strange beam from the petri dish hits Lisa, shrinking her down and into the tooth city, where she finds she is hailed as a god and Bart as the devil. The citizenry ask her for many answers, to which she promises she can help if she were big again. However, the people have not figured the technology to enlarge things. Matters turn worse when Bart claims the petri dish and the civilization as his own, winning the school science fair. Realizing she's trapped with the tooth city's inhabitants, Lisa angrily settles in to become their ruler, beginning by ordering them to bring her some nice shoes to replace her now gone slippers. 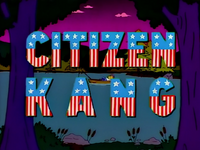 Kang and Kodos capture Homer and ask who his leader is. Homer says there's going to be an election, so Kang becomes Bob Dole and Kodos becomes Bill Clinton. Before dumping Homer off their ship, Kang sprays him with rum so that no one believes him. On the day of the election, Homer stumbles upon Kang and Kodos' ship and goes inside to free the real Clinton and Dole. He accidentally pilots the ship into space. Clinton and Dole agree on leading the country together and ask Homer to let them out. Homer accidentally ejects them from the ship and they die from the lack of oxygen and float on into the dark void of space. Homer then crashes the ship into the White House and climbs down and exposes Kang and Kodos to be aliens. Despite not being the real competitors, the people have to vote for one of them anyway. One of the citizens suggest a third-party vote, and Kang replies, "Oh, sure. Go ahead, throw away your vote." In the end, Kang wins the election. As the president he and the Rigellians enslave the human race to build a giant laser cannon to fire at a planet the humans have never heard of. Marge comments that Homer was right but that it's his fault that they're enslaved. Homer replies, "Don't blame me, I voted for Kodos." and is whipped by a Rigellian.