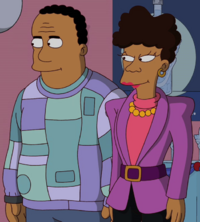 Bernice with her husband, Julius.

A heavy drinker, she fainted along with the other drunks when prohibition was announced.[2] When the whole town became addicted to SpringFace, Lenny pointed out that Bernice kept liking Bumblebee Man's posts and then said "that's how it starts".[3] She also laughs inappropriately, like her husband. If she is recruited to Marge's mob in "The Simpsons Game", she plans to say "Delighted to join this wonderful mob, a-heh-heh-heh."

Whilst exploring the town in The Simpsons Game, Bernice can sometime be seen having a conversation with Carl Carlson; discussing a past relationship they had before she was married to Dr. Hibbert.

This section is transcluded from The Simpsons: Tapped Out characters/Hibbert Family. To edit it, please edit the transcluded page.