Butch Patrick is an American actor, best known for playing Eddie Munster in The Munsters. 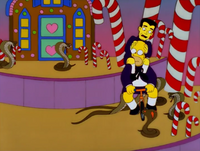 Homer and Butch Patrick in their stage show.

When Apu was considering putting the Octuplets in the Springfield City Zoo, Butch Patrick came along and told Apu that being in the public eye didn't mess him up. Apu then asked him why Eddie Munster was a werewolf when his mother was a vampire and his father was a Frankenstein. Patrick then agreed that it didn't make sense. Butch Patrick then told Apu to put his babies in the care of Larry Kidkill. Later, in Apu's apartment, when Apu and Manjula signed the contract to put their kids in the Zoo, Butch Patrick stamped the document as he is also a notary.

Later, when Homer offered himself as a replacement to the Octuplets, Homer rode around a stage on a tiny bicycle with Butch Patrick on his shoulders whilst cobras bit at them.[1]

In a documentary about The Simpsons, the narrator mentioned that trendy guest stars were brought in to grab ratings. A photo of Butch Patrick was then shown.[2]