Noah is a character in the Bible. 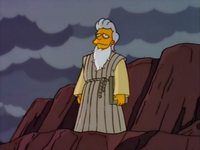 Noah was played by Troy McClure in a film. In the film, God told Noah to get two of every creature and put them on an ark exactly 300 cubits of length. And Noah had to especially get stink beetles. Noah questioned everything God told him to do. At the end of the film, God told Noah to go forth and was about to tell him the key to salvation when Kent Brockman interrupted the movie.[1]

Homer portrayed Noah in a retelling of Noah's Ark in the half time show for the Super Bowl.[2]

Barney auditioned for the role of Noah in Bart's Not Dead, even though Noah wasn't in the movie. Later, Barney was seen playing Noah in the movie, showing that they let him in.[3]

Bart told the story of Noah's Ark to Rod and Todd, where Noah was depicted as being identical to Ned Flanders.[4]