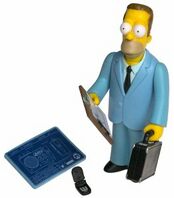 After "Brother, Can You Spare Two Dimes?", Herb Powell has remained unseen character for 20 seasons, apart from his brief cameo in "The Heartbroke Kid", where he was seen in a picture. Also, Herb has remained an unseen character in the comics, apart from the comic story Uncle Burn$, where he (again) only appeared in a picture. On September 1, 2012, Danny DeVito posted on his Twitter account that he would voice Herb in a season 24 episode ("The Changing of the Guardian"), for one line only. He voiced the line the day before (August 31, 2012).[6]