Robin Williams is an American actor and stand-up comedian. 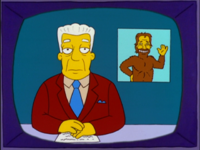 When an ozone hole was over Springfield, residents were advised to stay inside unless they either wore sunscreen or had a class 9, or "Robin Williams", level of hair coverage.[1]

He was mentioned by Lenny at Moe's Tavern. He apparently was having dinner at the restaurant with his children and he wasn't making his children laugh.[2]

He appeared in a dream of Homer Simpson's where he said that Stanley Kubrick wanted him to star in The Shining.[3]