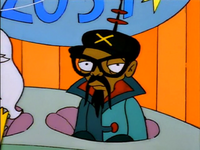 When Bart was famous he dreamt that when he is older he will participate in Match Game 2034 with Billy Crystal, Farrah Fawcett-Majors-O'Neal-Varney, ventriloquist Loni Anderson, Spike Lee and the vivacious head of Kitty Carlisle, and he crushes Kitty's vivacious head.[1]

When Bart sneaked into the adult section at the Lackluster Video he saw they had a section with Spike & Ang Lee movies.[2]

Krusty the Clown mentioned that he was the Spike Lee of the Toronto Raptors.[3]

He is one of the many people on "Ned's List of Laudable Lefties".[4]

He was on the rocket going into the sun to be killed.[5]