Who Shot Mr. Burns? (Part One)

"Ever since the beginning of time, man has yearned to destroy the sun. I shall do the next best thing: block it out."
―Mr. Burns

"Who Shot Mr. Burns? (Part One)" is the twenty-fifth and final episode of season 6 of The Simpsons and the one-hundred and twenty-eighth episode overall. It originally aired on May 21, 1995. The episode was written by Bill Oakley and Josh Weinstein and directed by Jeffrey Lynch. It guest stars Tito Puente as himself.

"Mr. Burns brings untold misery to many of Springfield's citizens and is later found shot outside the city hall with the main suspects being Waylon Smithers, Jr. and Homer Simpson." 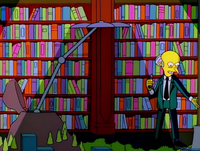 Mr. Burns showing Smithers his plan of blocking the sun

At the beginning of the normal ordinary school week, Principal Skinner opens up the school to find Superdude, the 4th grade gerbil, has died. He gives Willie the task of burying the gerbil, and in the process Willie strikes oil. Meanwhile, on the roof, Principal Skinner and Superintendent Chalmers are inspecting what caused the explosion when a worker comes up and tells them they struck oil. He also held up the corpse of Superdude. After thanking Superdude, he tossed the gerbil off the roof. Everyone in the school rejoices, as now they have all of the money they could ever want. Several teachers want new equipment, Willie wants a crystal slop bucket, and Lisa wants to hire Tito Puente to teach jazz at the school. However, Monty Burns has his eyes on the well, and wants to steal the oil (since Smithers forbid him from literally stealing candy from a baby.) First he tries to get Skinner to give the money to the Nuclear Plant by poorly disguising himself as Jimbo Jones, but to no avail. Finally, he uses a "slant drilling" operation to tap the well before the school can, thereby stealing the oil. After launching the oil, it causes some mayhem in the town. The jet of oil smashes into Bart's treehouse, leaving it in a wreck and breaking Santa's Little Helper's legs. The drill also crushes the ground under Grampa's retirement home, and the fumes from the oil force Moe's Tavern to close. And of course, all of the faculty and Lisa don't get their special equipment (and Tito Puente) because the school is now bankrupt from building the oil well, and some of the faculty (including Groundskeeper Willie) were laid off as a result of the same bankruptcy. All of these people (and Homer, who flips out when Burns can't remember his name one too many times) swear revenge on the old man. Not even Smithers can stand the acts his beloved employer has undertaken, sarcastically saying Burns has crushed all of his enemies: An old folks home, the local tavern and Springfield Elementary. Burns says he hasn't taken out his biggest enemy: the sun. He plans to block out the sun, thereby forcing the town to use his electricity forever. Smithers says he's stood by enough of Burns schemes but this one is too much and says he will have no part of it. Burns then fires him.

Mayor Quimby calls a town meeting. After noticing many in the audience are stroking guns, he opens the floor. Several people complain: Mr. Smithers tells everyone since Mr. Burns fired him, he has become a drunken wreck and always watches Comedy Central; Moe is mad he lost his bar; Barney is mad he lost Moe's bar; Lisa is mad he robbed the school of music; Skinner is mad he robbed the school of financial security; Tito is upset because he "robbed the school of Tito"; Homer is enraged because Burns fails to remember his name; Marge is mad he is making everyone yell; and Bart is disgruntled because Santa's Little Helper's leg was broken during oil drilling (although he initially said "look what he did to my friend" which caused people to assume Mr. Burns did something horrible to Milhouse until Bart clarified he meant Santa's Little Helper). Mr. Burns then shows up, and Bart charges at him in rage. Mr. Burns brandishes a gun hidden in his jacket, stating he has decided to protect himself ever since he was attacked in his office by an unidentified assailant (Homer, of course). Burns moves the machine into place, blocks out the sun, and as he leaves, it is noticed many townspeople are missing. A gunshot is heard, and Mr. Burns staggers out of an alleyway, collapsing onto the sundial, shot. Marge comments they may never know who did this, since everyone in town is a suspect. After a long silence Dr. Hibbert, with his trademark chuckle says, "Well I couldn't possibly solve this mystery. Can YOU?" pointing at the screen, at what is thought to be the viewer. The camera zooms out to show he is pointing to Chief Wiggum, who says he will give it a shot, since it is his job. An ominous tune plays after this. The words To Be Continued appear onscreen.

In a cut scene, after Mr. Burns had dressed up as Jimbo, Skinner asks him what he had done with Jimbo. It is then shown that Mr. Burns has given Jimbo a butchers shop in return for his shirt and hat and Jimbo was making sausages.[1]

The episode (and the second part) received positive reviews from critics and the writers of the book I Can't Believe It's a Bigger and Better Updated Unofficial Simpsons Guide, Warren Martyn and Adrian Wood, called it "A superb end to the season - and what's more, it's a genuine whodunnit. There's no cheating - all the clues are there." "Who Shot Mr. Burns?" ranked 25th in Entertainment Weekly's Top 25 Simpsons episodes' list, in 2003.