"Treehouse of Horror IX" is the fourth episode of season 10 of The Simpsons and the two-hundred and seventh episode overall. It is also the ninth installment in the Treehouse of Horror series and consists of three parts. It originally aired on October 25, 1998. The episode was written by David X. Cohen, Larry Doyle and Donick Cary and was directed by Steven Dean Moore. It guest stars Regis Philbin as himself, Ed McMahon as himself, Kathie Lee Gifford as herself, Robert Englund as Freddy Krueger and Jerry Springer as himself.

"Treehouse of Horror IX is an anthology episode that features mini-stories. In "Hell Toupée," Homer receives a hair transplant from executed criminal Snake which possesses him and makes him go on a murder spree. In "The Terror of Tiny Toon," a plutonium-powered TV remote zaps Bart and Lisa into an Itchy & Scratchy cartoon. "Starship Poopers" reveals that Maggie's real father is Kang, which leads to a custody dispute and an appearance on The Jerry Springer Show." 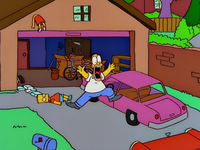 This is the normal opening sequence, but with a horror motif. Bart writes "The Simpsons Halloween Special IX" on the blackboard with blood and runs out the door. In the driveway, Bart falls off Homer's car while on his skateboard, and dies in the middle of the driveway. Lisa crashes into Bart, flying into the air, getting her head stuck in the wall above the garage door and dies. Homer gets out of his car, sees Marge's car coming, and screams as usual. However, Homer isn't quick enough to get out of Marge's way, so she crashes into Homer, killing him. In the living room, Freddy Krueger and Jason Voorhees are sitting on the couch. Freddy asks Jason where the Simpsons are, and Jason responds, "Eh. Whaddya gonna do?" (despite the fact he normally never talks), and turns the TV on, watching with Freddy. 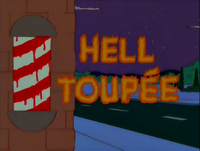 Snake is arrested for smoking inside the Kwik-E-Mart. Chief Wiggum explains after burning down an orphanage and blowing up a bus full of nuns (which Snake claims was self-defense) this is Snake's third strike, so he will be executed in accordance with the three strikes law. Before hauling Snake away, Chief Wiggum helpfully points out Apu, Moe and Bart are all witnesses. Snake threatens to kill all of them. Snake is executed in the electric chair on World's Deadliest Executions, hosted by Ed McMahon and proudly broadcast on Fox. Chief Wiggum sends the body to the hospital to be carved up for organ donations. Shortly afterwards, Homer visits Dr. Nick Riviera, who gives him a transplant of a full head of still-smoldering hair. The hair is Snake's, and when Homer goes to sleep the following night, it plants its roots in Homer's brain. With the hair controlling his mind, Homer murders Apu by stuffing him in his own Squishee machine. Homer later removes Moe's heart with a corkscrew and leaves him slumped face first in a bowl of Penicill-Os cereal. Bart realizes the other two witnesses have been killed, but is shocked when his own father comes after him. He begs Homer to fight the hair and, after a struggle, Homer rips the hair off his head. The hair tries to smother Bart. Then, as Chief Wiggum bursts through the door with Eddie and Lou, jumps toward the window. Chief Wiggum opens fire, the hair is riddled with bullets and is thus used as a blanket by Maggie. The story closes with Chief Wiggum remarking, "That's what I call a bad hair day!"

The Terror of Tiny ToonEdit

The Terror of Tiny Toon

Marge forbids Bart and Lisa from watching the Itchy and Scratchy Halloween special, even going to the lengths of taking the batteries out of the remote control. They refuse to go trick-or-treating with Marge as Homer is dressed as a hobo and Maggie is dressed as a pirate. But when Marge goes, Bart finds a small piece of highly unstable plutonium in Homer's toolbox and hammers it into the remote's battery slot. When they use the remote, the kids actually enter the world of Itchy and Scratchy. They watch Itchy decapitate Scratchy when he trick or treats at his house and use his head in the manner of a Jack-o-lantern. While the two laugh, Scratchy's head asks why Bart and Lisa are laughing to which Itchy replies they are laughing at his misfortune. Scratchy re-attaches his head to his body, declares what the duo did was mean, and forms a partnership with Itchy to "teach them a lesson". They throw deadly objects at Bart and Lisa. As they try to escape, the hated character Poochie (voiced again by Homer Simpson) passes by, but he is run down by their car. They escape from the car, and wind up on Live with Regis and Kathie Lee in a pot of soup because Homer changed the channel. Bart and Lisa return to Itchy and Scratchy's house when he changes the channel back. Lisa urges Homer to press the "exit" button, which gets her and Bart (whose body was devoured from the neck down by piranhas, leaving only his skeleton) out of the TV. She presses the "rewind" button on the remote to restore Bart's flesh, but unfortunately, Itchy and Scratchy smash through the screen. However, they emerge the same size as their real animal equivalents, and they are therefore harmless. Homer decides to make Itchy a pet, and Snowball II falls in love with Scratchy. However, Marge decides to neuter him, causing Scratchy to scream while covering his crotch. 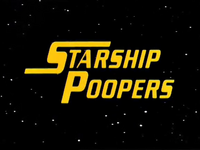 On an ordinary day, Marge discovers Maggie's first baby tooth, which appears to be a sharp fang. Maggie later loses her "baby legs" and grows green tentacles. Marge decides to take her to Dr. Hibbert, who prescribes "Fire, and lots of it!" after Maggie crunches his equipment with her fang. At home, it is found Maggie can contact somebody by sucking extra-rapidly on her pacifier, which appears to be the aliens, Kang and Kodos. They arrive at the Simpson house, coming to retrieve Maggie. Marge reveals Kang is Maggie's real father and retells the story: Kang and Kodos abducted her while she was doing laundry, selecting Marge for a cross-breeding program. She says the aliens used mind-control techniques on her, by Kang pointing and saying "Look behind you!" before zapping her with an insemination ray. She recalls nine months after the abduction, Maggie was born. Kang and Kodos demand the Simpsons give Maggie to them and Homer and Kang start to fight over Maggie until Bart stops them and suggests there can be only one way to solve the problem: let the Simpsons appear on The Jerry Springer Show, with Homer and Kang continuing to fight it out. When they appear to discuss things, Kang uses his ray gun to vaporize an annoying audience for criticizing him. During Jerry's "final thought", Maggie attacks Jerry and kills him while Homer and Kang resume fighting.

Kang and Kodos now threaten to kill every American politician unless the Simpsons give Maggie to them. Marge and the Simpsons slyly imply the aliens couldn't possibly kill every politician, Kang and Kodos fly off to do so, and Bart reminds them not to forget Ken Starr. Just when they're about to leave, Maggie takes out her pacifier and tells everyone in Kang's voice "Very well, I'll drive! Ha ha ha! I need blood!".

On The Gracie Films logo, Regan Philbin said "My eyes! My beautiful eyes!"

In 2008, "Starship Poopers" was named the tenth best Treehouse of Horror segment by IGN.