Troy McClure is a cheesy B-movie actor who has fallen on hard times. He is often seen shilling for shoddy products or hosting questionable shows. 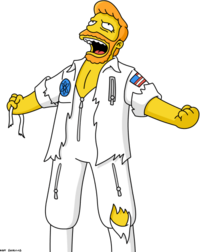 McClure is a stereotypical Hollywood has-been, reduced to appearing in low quality films and television presenting jobs. During the early seventies he had a highly successful acting career, but it has since become worse.[1] He often appears in short video clips seen on television or in a public place. He often is shown presenting educational videos[2][3] and infomercials.[4] When introducing anything that he does, McClure lists projects that he has previously done with the phrase "Hi, I'm Troy McClure. You may remember me from such [films, educational videos, voiceovers, etc.] as..." and will mention two titles of a similar subject to that of the current performance he is giving. 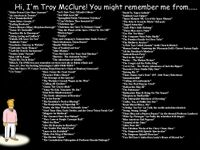 McClure's career went downhill due to his reported unusual paraphilia, which apparently involved fish, to the point where he had not worked in twelve years. To cover this up, he began a relationship with Selma Bouvier, whom he had met when she gave him an eye test at the Department of Motor Vehicles. This revived his career, leading him to star in Stop the Planet of the Apes I Want to Get Off, a musical version of the film Planet of the Apes. To further revive his career, McClure's agent MacArthur Parker suggested that he marry Selma, a proposal which she accepted. At his bachelor party, a drunken McClure told Homer Simpson that the marriage was just a sham to help his career. Unaware of this, Selma married Troy. She later discovered that their marriage was a sham and although she accepted it, she drew the line when McClure's agent suggested that the pair have a child. As "all the big parts these days are going to family men" (according to Parker), having a child would have secured McClure's casting as McBain's sidekick in McBain IV: Fatal Discharge. Selma, however, rejected the offer and left McClure because she didn't want to bring a child into a loveless relationship. As a result, McClure starred in his own independent film The Contrabulous Fabtraption of Professor Horatio Hufnagel.[5]

In addition to his appearances within episodes, McClure presented the episodes "The Simpsons 138th Episode Spectacular" and "The Simpsons Spin-Off Showcase". The first is a behind the scenes look at The Simpsons, answering questions and featuring extra "never before seen" material.[6] The second is an episode presenting three possible spin-offs from The Simpsons.[7]

A poster for "Meat and You: Partners in Freedom" with Troy's picture was seen outside Channel 6 studios when Homer had a fight with Peter Griffin.[8]

McClure was based on the typical "washed up" Hollywood actor, with inspiration for his character and name being drawn from B-movie actors Troy Donahue and Doug McClure. Mike Reiss later met Doug McClure's daughter who revealed that her father had found the homage funny and McClure's children would call their father Troy McClure when his back was turned. Phil Hartman was cast in the role due to his ability to pull "the maximum amount of humor" out of any line he was given,and McClure's visual appearance is similar to that of Hartman himself.[9] McClure drives a 1981 De Lorean DMC-12. McClure lives in his home, resembling the one from the movie 'Body Double',[1] in the upscale residential area of "Springfield Heights", which is also resided by Mob boss "Fat" Tony D'Amico and Jewish entertainer Krusty The Clown.

McClure's character is developed in "A Fish Called Selma", when a more in-depth look into his private life is shown. The episode is the only one in the entire run of the series that shows true emotion from Troy McClure.[1] Show runners Bill Oakley and Josh Weinstein were big fans of Phil Hartman, and wished to make an episode entirely about McClure in order to give him as much to do as possible. From this came the idea of him marrying Selma Bouvier, as she was "always marrying people".[1] Having Troy McClure as the star of the episode pleased animator Mark Kirkland, as he found McClure's voice great to animate to, allowing him and other animators to "open him up visually as a character".[1] It is hinted throughout the course of the episode that he has strange sexual behaviour. Throughout the production of the episode, the writers did not know what the "unsavoury" sexual preference was. They decided on a fish fetish, an idea James L. Brooks suggested as it was "so perverted and strange, it was over the top".[1] McClure's apparent fish fetish was mentioned by The Guardian in their article about a Swiss scientist's discovery that sticklebacks ejaculate more sperm after they have seen images of fish flirting.[10]

One of the appearances of Troy McClure

Hartman died on May 28, 1998.[11] Rather than replace Hartman with a new voice actor, the production staff retired McClure, along with Hartman's other character Lionel Hutz, from the show. He last appeared in the season ten episode "Bart the Mother". Before his death, Phil Hartman had often expressed an interest in starring in a live action film about McClure, with several of the show's writers wanting to help make it.[12] Josh Weinstein stated that the plot of "A Fish Called Selma" could have worked well as a live action film.[1] Matt Groening later told Empire that the idea never "got further than enthusiasm" but that "it would have been really fun."[13] Hartman was cast before his death as Zapp Brannigan in Matt Groening's Futurama. Billy West took over the role, and based his vocal performance on Hartman's characterizations, particularly McClure.[14]

In a 2006 article IGN.com ranked McClure in first position on their list of the "Top 25 Simpsons Peripheral Characters", citing that he is "a wonderfully bizarre and entertaining character that showcases the best of what small roles on The Simpsons can be."[15] In his book Planet Simpson, Chris Turner describes McClure in detail citing that he, along with Lionel Hutz, "represent the most significant contribution to the show outside its permanent cast" and that "the show's Golden Age is hard to imagine without them". McClure became the perfect portrayal of a media stereotype and a "gut-achingly funny reinterpretation" of a character type that had been "done to death" The Observer listed McClure educational films Smoke Yourself Thin; Get Confident, Stupid!; Firecrackers: the Silent Killer and Fuzzy Bunny's Guide to You-know-what as part of their list of the three hundred reasons why they loved the show.[16]

McClure's most prominent episode, "A Fish Called Selma", is often regarded as one of the best episodes in the show's history, and is one of the top five favorites of the staff.[1] Entertainment Weekly placed the episode eighth on their top 25 The Simpsons episode list.[17] IGN.com named the episode the best of the seventh season, stating that it seemed the "obvious pick". They also called the Planet of the Apes musical, which McClure stars in, the best moment of the episode and "maybe even the whole show".[18] Associated Content also praised the musical, naming it the ninth best musical number in The Simpsons history.[19]

McClure was made into an action figure as part of the World of Springfield toy line, and was released in the "Celebrity Series 1" wave.[20] He also features briefly in the video game The Simpsons: Virtual Springfield, introducing the town of Springfield to the player.[21]