Santa's Little Helper, also known as No. 8[2] or His Majesty, King Suds McDuff of Sixpakistan,[3] is the Simpson's family dog. He is a greyhound. 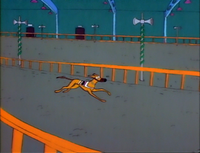 Homer was relying on a Christmas bonus to buy presents, but didn't get it. Santa's Little Helper concurrently shares a birthday with Homer on May 12.[4] He was relying on this bonus because the jar of Christmas money Marge accumulates for the family's Christmas treats was disposed of to pay for the removal of a tattoo Bart got on his arm. Homer took the small amount of Christmas money he made working as a Santa at the Springfield Mall and bet it at the dog track. He had inside information on what dog was going to win, but instead bet on the "long shot," Santa's Little Helper, believing his name to be a sign. Santa's Little Helper finished last (apparently, it was the latest in a long string of last-place finishes), and his frustrated owner abandoned him. Running to the first person he saw, the greyhound leaped into an angry Homer's arms and kissed him, calming him immediately. Homer and Bart brought him home, and everyone was so happy with him it was a merry Christmas after all, where he was accepted as the family pet alongside Snowball II.[2]

Santa's Little Helper's life with the Simpsons was not always easy. He nearly died of gastric torsion (referred to in the show as a "twisting of the stomach") because Homer initially couldn't afford $750 for the required operation;[5] and he also broke two legs when Bart's treehouse was demolished by Mr. Burns' slanted oil well drill (The latter of which caused Bart to hate Mr. Burns immensely).[6]

At one time, Santa's Little Helper was shortly abandoned by Bart for Laddie, a purebred and very well-trained dog he bought from a mail-order catalog together with various other expensive gifts and gadgets. To do that, Bart used a credit card he applied for under the name of his dog, yet the credit card company misread the form and issued a card to Mr. "Santos L. Halper". Laddie learned many tricks Santa's Little Helper was completely unable to perform (most notably a back flip, CPR and using a toilet). The Simpson family nearly forgot about their old pet, and Bart eventually gave him away instead of Laddie when repo men take back everything he fraudulently purchased. Feeling guilty about this disloyalty and bored with his too perfect new dog, Bart tried to get Santa's Little Helper back. When he finally found him, Santa's Little Helper was serving as a seeing-eye dog for a blind man named Mr. Mitchell, but eventually decided to return to his former owner, Bart.[7]

He also becomes a great hero after he saves Homer in a cornfield maze, and becomes enrolled as a police dog, teamed up with Officer Lou. Both Lou and Santa's Little Helper make a good team, foiling crimes together. After biting Bart's left leg (due to the fact he got angry when the court stated he violated one of the police codes while catching Snake Jailbird), Santa's Little Helper is sent off by the Simpson family to live with Lou. Later on, once Springfield Elementary is in danger and Bart isn't able to escape, Santa's Little Helper comes in to save him, and goes back to living with the Simpsons.[8] Unlike when he was the Duff mascot (which depicts the dog as a coward),[3] Santa's Little Helper is depicted as a very brave and smart dog.

It is implied he slept with Snowball II after New Year's Eve when both Santa's Little Helper and Snowball II came out of the doghouse looking ashamed about the night before.[13]

Santa's Little Helper has been shown to perform abilities no other dog can. These include standing up on his hind legs and balancing a Duff Beer can on his nose,[3] changing a baby's diaper,[15] and speaking English.[16] He also said (through barks) he survived Trappuccino by doing things no other dog should ever do.[10]