Ralph was also part of a rather infamous hoax where Homer, Principal Skinner, Apu, Lenny, Carl, Chief Wiggum and others had become so fed-up with the whole issue of voting early for the election that they decided to cast all of their votes to someone who was not only unbelievably small, but also so young and unbelievably unintelligent it would be impossible for him to be considered a candidate (they unsurprisingly chose Ralph). Ironically, Lisa discovers that Ralph is not only aware of what being nominated means, but is also taking the idea of being elected seriously. Using his childish behavior, he intentionally manipulated the Republican and Democratic parties to join forces in their support of him.[9]

During class, Ralph's teacher Miss Hoover will stop lecturing the class for a moment to question Ralph's actions such as eating something he shouldn't, or saying something bizarre or oblivious. Another common 'Ralph' moment is that Ralph will be at a major event, and will say something to either perplex everyone present or point out something so glaringly obvious it's funny. Ralph has quite a knack for getting himself into sticky situations as well. Examples of Ralph moments include him gorging himself with chocolate,[10] being profiled by a scary dentist,[11] pretending to be a firetruck,[12] pretending he is an imaginary puppy,[7] and proclaiming that he will attend "Bovine University".[13] He has been shown wetting himself in public.[14] 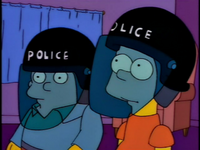 In the episode "Lisa's Wedding", he becomes one of Krusty's sideshows.[19]

In Ralph's first credited appearance in the show was the episode "Moaning Lisa", he was considerably different in both appearance and behavior from his later appearance, although he also briefly appeared in the first episode "Simpsons Roasting on an Open Fire". Ralph's signature use as a character in the show is to deliver either an odd bit of behavior, or dialogue which either perplexes others or merely gives the audience a quick laugh. Originally intended to be a "Mini-Homer", Ralph eventually took on a life of his own. The staff figured that he'd also fit perfectly as the son of Chief Wiggum, a fact made canon in "I Love Lisa", (although he is referred to by his last name of Wiggum in "Kamp Krusty" before). Ralph was named after comedian Jackie Gleason's character on The Honeymooners Ralph Kramden. Matt Groening considers any lines for Ralph "really hard to write."