Coltrane (a.k.a. Snowball IV) was the Simpsons' fourth cat. He bore a slight resemblance to Bart. 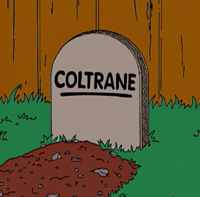 Lisa adopted Coltrane from an animal shelter shortly after the death of Snowball III. Originally, Lisa was not sure whether she wanted another cat. However, she was won over by his original name (Coltrane), which made him a namesake of jazz musician and sax player John Coltrane.

As soon as she brought Coltrane the cat home, Lisa decided to play some of John Coltrane's music for him. Unfortunately, the music either frightened him or wasn't to his liking, as he jumped out the window to his death. Lisa held a memorial service for him, as she had just recently done for Snowball II and Snowball III. Coltrane's service ended up being very brief, however, as the only thing Lisa could think of to say was "We'll always have the ride home from the animal shelter."

Coltrane had green eyes. He was the only Simpson cat (except for Snowball I) that was actually white; previous and future cats named "Snowball" are black or brown.[1]

In Bart's coma dream, Coltrane was one of the ghosts who Bart saw.[2]