Handsome Pete is a strange, diminutive, small character who plays the concertina, and whose face resembles a distorted Krusty the Clown.

When Bart was looking for Krusty, he blew up a balloon with Krusty's face on and asked the Sea Captain if he'd seen him. The Captain, on seeing the skewed image of Krusty on the balloon, answered, "Aye, that's Handsome Pete, he dances for nickels!" At that point Handsome began to dance and play his concertia.[1] 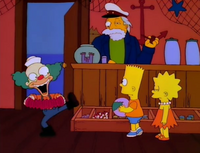 He was seen dancing at a street party started by Larry Burns.[2]

He was also seen watching Russ Cargill's speech when the Dome was placed on Springfield.[3]