Hans Sprungfeld, better known as Jebediah Obadiah Zachariah Jedediah Springfield[1] is the purported historical founder of the town of Springfield.

Jebediah Springfield was born in Axhandle, Virginia, in 1774. His dream was to go west and explore the American frontier. When he was thirteen he left school and started to help his father at the farm, but discovered that he was allergic to soil. He then started to work in a shop that printed fishing almanacs and wrote his own pamphlets. He was hired by a mule skinner named Bucskin Calhoun and learned from him valuable lessons in wilderness survival, navigation and attire.[2]

He later led a band of wagons from Maryland and headed westward with his partner Shelbyville Manhattan on a quest to find "New Sodom", after misinterpreting a passage of the Bible. They later parted over political differences; Manhattan wanted to found a town where people could marry their own cousins, while Springfield wanted a town devoted to chastity, abstinence, and a flavorless mush he called "root-marm". Manhattan went on to found the rival town of Shelbyville.

Despite Springfield's hero status in modern-day Springfield, many of his famed deeds have come into question under historical examination. On an expedition to Springfield's historic "Fort Springfield", Bart Simpson uncovered inconsistencies in the Jebediah legend, discovering he accomplished multiple heroic feats on the same day in different and far apart locations.[3]

Lisa Simpson later proved that "Jebediah Springfield" was in fact a bloodthirsty pirate and enemy of George Washington named Hans Sprungfeld, who had changed his name in 1795 to hide his identity. He wrote his confession on a scrap of paper that formed the "missing piece" of the famously incomplete portrait of George Washington, which he procured when he stepped on the original painting while it was still wet.[4] However, upon seeing the town pride Springfield has for their founder, Lisa decided to keep the discovery to herself.

A distinguishing characteristic of Sprungfeld was his prosthetic silver tongue, which was built to replace his real tongue which was bitten off by a Turkish pirate during a groghouse fight. According to rumours, the silver tongue is currently in the possession of Mayor Quimby, who uses it as a paperweight.[5]

Springfield is said to have dramatically killed a bear with his bare hands, though revisionist historians have determined the bear in fact probably killed him in 1831.[6] The only witness was Ian McTauge.[2] A statue depicting Springfield's victory stands in the center of the Springfield town square, in front of the city hall. His secret will contains a confession that he was suffering from then fatal diphtheria and according to Lisa Simpson's research, he died of syphilis. The will also reveals that the untameable buffalo he was believed to have tamed was already tame and that he merely shot it.[4] After he died his two sons, Obadiah and Zechariah Springfield, split the city in two parts.[6]

Springfield had many famous quotations, such as "A noble spirit embiggens the smallest man", and was well known for his figurative and literal silver tongue. He also wore a coonskin cap.

The Springfield Historical Society, headed by Hollis Hurlbut, is devoted to the study of the town's history, specially Jebediah's. Hurlbut, who is aware of Springfield's true background, keeps the truth hidden. 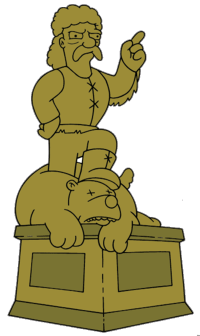 The Springfield Marathon commemorates an occasion on which Springfield ran across six states in order to avoid his creditors.

The statue was once beheaded with a hacksaw by Bart Simpson, who thought that it would make him more popular. In reality, the town became depressed and angry, leaving Bart to endure "The Tell-Tale Heart"-style guilt before he returned the head to its rightful place.[1] It appears that whilst the head is back in its rightful place it has never been properly re-attached, as it frequently falls off.

In Bart's coma dream, Jebediah Springfield was one of the ghosts who came to Bart to get help to move on to the afterlife. He told Bart to help them.[7]

This section is transcluded from The Simpsons: Tapped Out characters/Founders. To edit it, please edit the transcluded page.