David Hasselhoff is an American actor and singer.

When Lisa started talking, Bart asked her if she could say "David Hasselhoff". She did, and Hasselhoff then became her third word. (To Homer's frustration, though, she still said "Homer" instead of "Daddy".)[1]

In "...Six Degrees of Homer Simpson ...sort of!" Homer connected Kid Rock and Joe C. to Scrappy-Doo. He did this through: 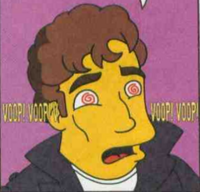 Hasselhoff under the influence of the alien signal.

Kang and Kodos abducted Bart and brought him on board their ship. Bart was impressed with the aliens' technology and ran around pressing buttons and pulling levers, hoping to blow something up. One button apparently activated a mind-control signal, which zapped David Hasselhoff while he was at an Oktoberfest event performing "Hooked on a Feeling". As the signal hit him, Hasselhoff stopped singing, his eyes glazed over, and he said, "Return to the mothership? But world domination is only 95% complete."[3]