"Barting Over" is the eleventh episode of the fourteenth season. It first aired on February 16, 2003. 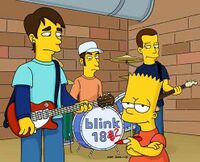 Alternate promo for the episode

"Bart moves out and lives on his own after an argument with Homer due to an advertisement he starred in as a child."

After Bart and Lisa discover an ad that Bart starred in as a baby, Bart asks where the money went and Homer tells him it was used to buy back incriminating photos of Homer dropping Bart from a balcony. After attacking Homer, Bart angrily tell Marge that he's sick of Homer's treatment of him, to which Homer brutily responds that he can do whatever he wants to Bart until he's 18 and that when he's 17 he plans to work him like a dog. Angry, Bart then goes to see the Blue-Haired Lawyer in order to get emancipated. The next day, the lawyer serves Homer with a subpoena and includes a side of bacon in order to get Homer to open the door.

At the trial, the lawyer makes a case that Homer swindled Bart and has clear anger-management issues which is proved when Homer shakes his fist at everyone in the courtroom. Judge Harm grants Bart's request based upon the testimony and her own personal opinion of Homer, she had been drawing a picture of him hanging during the trial and orders Homer to give Bart half his salary until Bart is paid back all the money Homer stole. Homer rushes the bench and gets knocked out by a bailiff.

The next day Bart leaves the house and moves into a loft downtown. He soon finds that Tony Hawk is living in the building and throwing a party with Blink 182. He and Hawk become friends, and Bart is content with his new life. Back at the Simpson house, Marge convinces Homer to apologize to Bart, and the family goes to meet him at his loft. Homer apologizes and requests Bart come home. Bart accepts the apology, but tells them that he is going on Tony Hawk's Skewed Tour.

At the event, Homer meets up with Hawk and pleads with him to pretend to lose to him so that he can make Bart proud of him again. Tony reluctantly agrees and gives Homer a modified skateboard, which does all the stunt work (Homer has Tony lift him onto the board, the only thing Homer would have to have done himself). Later, Homer challenges Tony to a skateboard match and does a good job, thanks to the skateboard. Tony, unhappy about being showed up by Homer, decides to "take out the trash". They duel with their skateboards in mid-air, and Tony falls to the ground. Homer speaks to Bart and asks him to come home. Bart says that Homer still doesn't understand that he left because he was tired of his dad not caring how he felt. After a word from Tony, Homer finally understands, he promises Bart that he will never ill-treat him again.

Lindsey Naegle approaches Homer and asks him to star in a commercial. Homer accepts so that he can get Bart fully repaid. Now Homer is embarrassed when he watched the final product, an ad for an impotence drug, but Bart told him that nobody will remember after fifty years. Fifty years later, Homer is dead, his tombstone has the phrase "impotency spokesperson" on it, and an older Nelson Muntz laughs at his grave.

Although, this is advertised as the 300th episode, it is actually the 302nd to be broadcast. It was written by Andrew Kreisberg and directed by Matthew Nastuk. Tony Hawk guest stars as himself.