Drederick Tatum is a former boxer of Springfield. He seems to have quit boxing. He used to be known to have a bad temper since he was put under arrest because of pushing his mother down the stairs, but now he can control his actions. 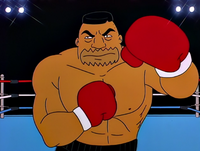 Drederick Tatum was a former Olympic Gold medallist, first became World Heavyweight Champion after defeating Watson in the heavily promoted "Bout to Knock the Other Guy Out!". He grew up in Springfield, recalling that that town was a dump (since he once said this: "If you ever see me there again you'll know I really [bleeped]-up bad"). He later served time in prison after pushing his mother down the stairs. Upon his release, he was booked for a match against Homer, during his small-time as a boxer who had never been knocked out. Drederick was managed during this time by Lucius Sweet, a vicious boxing promoter. He also visited the school to make a speech, however, Lisa ended up using him to test her hypothesis that bullies tend to attack nerds due to a certain chemical in their sweat, which evidentially proved to be true as Nelson reacted unwillingly but instinctively going up to Drederick and punching him, while Drederick told Nelson to stop otherwise he will kick him. He was also a friend of Carl (they met at a party held by Dr. Hibbert), which proved beneficial to have Homer help Marge train in the mixed fighting tournament to end it. His house also has a few exotic animals. He also got injected by Dr. Hibbert who was trying to inject Bart at the Springfield Amusement park and punches him say that black off black violence must end.

He was once hit on by Edna Krabappel but told her "you don't want that, trust me." [1] Despite this he did have a relationship with her.[2]

This section is transcluded from The Simpsons: Tapped Out characters/Sporty Tough Guys. To edit it, please edit the transcluded page.

Drederick Tatum is a parody of Mike Tyson, right down to his criminal record and high-pitched, lisping voice and his mansion full of exotic animals.

Jay Pharoah took over the role of Tatum from Hank Azaria, starting in the season 33 episode "You Won't Believe What This Episode Is About – Act Three Will Shock You!"