Snowball III was the third cat owned by the Simpson family.

Snowball III was a brown male cat and had light green eyes. 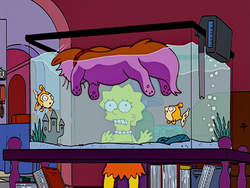 Lisa adopted Snowball III from an animal shelter shortly after the death of Snowball II. At the shelter, she passed over a skunk, a Siamese cat, a cat she assessed as "too needy," and a cat with an eye infection before finally deciding upon Snowball III. After bringing him home, Lisa went into the kitchen to prepare some cat food to serve Snowball III his first meal in his new home. She went into the living room to check on him, only to find him drowned in the aquarium, apparently having tried (and failed) to catch a goldfish.[1]

In Bart's coma dream, Snowball III was one of the ghosts Bart saw.[2]