The Devil, also known as Satan, is in charge of Hell. Ned Flanders has sometimes been seen as the Devil.[1][2] However, there is another devil of sorts. He often appears in visions or dreams.

When Mr. Burns had a birthday he thanked Satan for his long life in the Springfield Shopper and a picture of him giving Satan a check for one billion dollars is printed.[3]

Whenever Charles Montgomery Burns has a near death experience, Satan tries to get Burns to hell, but continually fails. He also appears as a snake to try and get Eve to eat an apple from the tree in the Garden of Eden.[4] 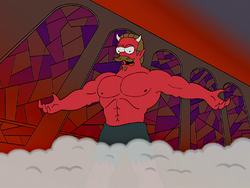 Flanders as the Devil