Arnold "Arnie" Pye, once referred to as Bill Pye, is a disgruntled, somewhat eccentric helicopter traffic reporter for Springfield's KBBL-TV (Channel 6). His segments are titled Arnie Pye With Arnie in the Sky.

He has an apparent dislike of anchorman Kent Brockman, with whom he often gets into arguments on the air, because Kent is a much bigger and luckier star. Their rivalry may have also started when Brockman described Arnie's job as "a mere traffic report".[1]

Pye's helicopter once crashed; he managed to say "Tell my wife I love—" before the live feed was lost. The incident was dismissed with a chuckle by the oblivious Brockman. However, he survived and has been seen in several episodes afterward. 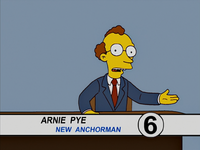 Arnie Pye as an anchorman

When Kent was demoted to a Weatherman and eventually fired, Arnie briefly became the new head anchor. He spoke in a deeper, smoother voice, but returned to his normal register when he got excited near the end of the report. (A similar gag was used in a previous episode with Bumblebee Man, who took over Brockman's desk and spoke perfect English as he delivered the news, right up until the end.)[2]