Wade Boggs is a former baseball player and was one of the players in the Springfield Nuclear Power Plant softball team. 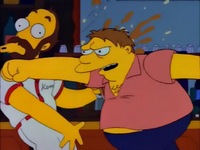 He was hired at the Springfield Nuclear Power Plant as a janitor, but it was actually intended for him to play for the plant's softball team. When Bart and Ralph were picking players for their softball teams, Ralph picked Wade Boggs. Boggs couldn't play in the last game because he got in an argument with Barney at Moe's Tavern over who is the greatest English Prime Minister. Boggs argued for Pitt the Elder while Barney argued for Lord Palmerston. In the end, Barney knocked Boggs out.[1]

When Homer, Bart and Lisa were choosing somewhere to spend Christmas, two of the options were for "Yankees Fantasy Camp" and "Yankees Suck Fantasy Camp", both starring Wade Boggs.[2]