"The Simpsons Spin-Off Showcase" is the twenty-fourth episode of season 8 of The Simpsons and the one-hundred and seventy-seventh episode overall. and aired on May 11, 1997. The episode was written by David S. Cohen, Dan Greaney and Steve Tompkins and the story was written by Ken Keeler. The episode was directed by Neil Affleck. It guest stars Phil Hartman as Troy McClure, Tim Conway as himself and Gailard Sartain as Big Daddy.

Troy McClure gives us a tour of the "Museum of TV and Television" and mentions spin-off shows. He shows that FOX needed some new shows for their fall line up, and the Simpsons made three new shows to fill up the schedule. He then shows us the three new shows. 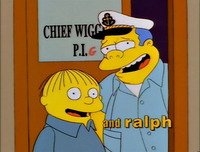 In this small skit, Chief Wiggum and Skinny Boy (Principal Skinner) return to their old town, New Orleans, to come about a recent crime by a gangster known as, "Big Daddy". Later that night, the gangster sneaks into Chief Wiggum and Skinny Boy's HQ and sends a crocodile to eat Wiggum. Fortunately, Skinny Boy comes in and strangles the animal to death. Lucky for them, that one was corked. Then, the two crime fighters walk into Ralph Wiggum's room and finds that Ralph is gone, and is replaced with Big Daddy's calling card, inside of a skull.

The next day, Chief Wiggum and Skinny Boy are discussing the crime, when they hear some noise outside. They walk outside and notice that there are tons of huge floats flying around. Suddenly, five huge heads surround the chief. Lucky for him, the heads fall off revealing the people to be none other than, The Simpsons. After having a short discussion with the family about Mardi Gras, Wiggum spots Ralph standing on Big Daddy's shoulder's saying, "Look, Big Daddy! There's regular daddy!" Big Daddy lifts Ralph off his shoulders and runs away, Chief Wiggum and Skinny Boy giving chase.

The five run through town until Big Daddy comes upon two boat type things and drives away. Wiggum and Skinny Boy then hop in the other one and gives chase. They chase each other through the canal and approach a small island with a mansion on it. Skinny Boy comments by saying that was the governor's mansion that disappeared 2 weeks ago. The five run into the mansion until they arrive in the main office where Big Daddy hops into a chair and quickly turns around. Having the idea of being caught, Big Daddy tosses Ralph into Chief Wiggum's hands, and jumps out the window, and begins to swim away. The skit ends with the four making a funny joke, and then laughing. 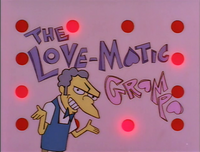 While at Moe's Tavern, Moe Szyslak becomes lonely, until he realizes that Grampa's spirit is inside his love tester. When he was going to heaven, he got lost along the way. He helps Moe get a date with a beautiful lady. But Moe doesn't know what to do on the date so he brings Grampa along on the date and puts him in the hoodlums's bathroom. When Moe needs advice, he runs to the bathroom, only to see the machine being smashed by school bullies Jimbo Jones, Kearney Zzyzwicz and Dolph Starbeam, with Kearney complaining that the machine called him gay. The machine starts malfunctioning and what he says Moe takes as advice. He comes back to the bathroom wearing his dinner. His date comes in and sees what Moe did just for her and is touched. 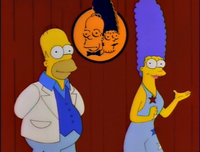 The Simpsons host their own show in Radio City Music Hall. The whole family is there, along with many favorites such as Waylon Smithers, Jr., The Sea Captain, Hans Moleman and many-low children guests, especially Milhouse Van Houten. The show features various skits including an wildlife-themed short named "What if The Simpsons Were Beavers", a sweets-based, kooky-looking karaoke clip named "I Want Candy", and a poem narrated by Hans, named "Fainting Flower". Tim Conway guest stars and at the end the whole family gets into a pillow fight.

Troy McClure ends the special by explaining upcoming 'storylines' for season 9 including Lisa being turned into a frog by a wizardlike Homer, Selma marrying, Itchy, Lenny, and Bumblebee Man, Bart discovering he has two long lost brothers, and Homer and Marge only being able to see a smart, but tiny alien named The Great Ozmodiar. However, only the character of The Great Ozmodiar appeared and even that was never major.

In its original American broadcast, "The Simpsons Spin-Off Showcase" finished 61st place in the weekly ratings for the week of May 5–May 11, 1997 with a Nielsen rating of 7.3. It was the seventh highest rated show on the Fox Network that week. Even though Troy mentions that The Simpsons, Melrose Place, and The X-Files are the only shows worth a slot in the next season's lineup, three other Fox shows actually did better than The Simpsons that week. These were Beverly Hills, 90210, King of the Hill, and Married... with Children.