"Skinner's Sense of Snow" is the eighth episode of season 12. It originally aired on December 17, 2000. The episode was written by Tim Long and directed by Lance Kramer.

"When a large storm snows in Springfield Elementary, the children are trapped inside for the holidays and soon rebel against Principal Skinner - while Homer tries to rescue them, using Flanders' car."

At home, Homer is watching a sports talk show. The family then comes into the room and tells him that they're going to Cirque de Purée, much to Homer's annoyance. During the performance, the wind starts to pick up, getting stronger. The show is then cancelled when the circus tent is blown away by the wind, with everyone evacuating. Overnight, a heavy snow storm happens, leaving Springfield covered in snow. The next morning, the kids eagerly listen to the radio in the hopes that school will be closed. However, they find that it's open and have to go in.

Skinner takes charge over the kids

On the bus to school, the kids see everyone else in town enjoying a snow day. When they get to school, they find that no teachers are in, the union having called an "emergency caucus" (when in fact, they were out having fun). Principal Skinner then puts on the film The Christmas That Almost Wasn't But Then Was, which all the children hate. The film then breaks just as the school day ends. However, the children can't leave the school due to being snowed in.

Skinner tells the kids that the phone lines are down so they have to all stay in the school. Meanwhile, Homer and Ned attempt to rescue the kids, turning Ned's car and house roof into a snow plow. At school, Willie gives the kids their meal, one apple and a handful of relish. Nelson then gets sick of it and attempts to escape, riding his bicycle into the snow. However, his bike bounces off and he can't get out. The kids then start chanting that they want out. Skinner then finds his old army footlocker in his office and puts on his uniform and demands respect and obedience from the kids. 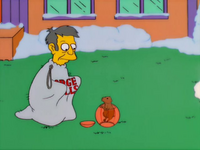 Skinner tells Nibbles to "chew through [his] ball sack".

That night, Bart attempts to tunnel out of the school. Homer and Ned, who are still on their way to save everyone, crash into a fire hydrant which then freezes the makeshift snowplow. Skinner then catches Bart making the tunnel and stops him. After demanding that Willie destroy it, Willie refuses and quits, so Skinner destroys the tunnel himself, getting stuck in the cave in. The kids then take over the school, putting Skinner into a dodgeball bag. Meanwhile, in Flanders' car, fumes start to enter the car and make them sleepy.

When the kids are distracted going through their permanent records, Skinner sneaks into a classroom and releases Nibbles, telling him to go and get help. Back in Flanders' car, Homer is hallucinating. At that point, Nibbles smashes through the car windscreen, letting the fumes out. They then get the car free and then drive past the Cracker Factory, smashing into the salt silo. The silo falls over and spills salt all over the snow at the school, melting it. The kids all escape as Homer and Ned turn up and pick the kids up in the car. Nibbles then goes back to Skinner and Superintendent Chalmers shows up, asking for a good explanation for everything that happened. He then leaves after Bart tells him that there is a good explanation. The Simpsons and Flanders then go home as exhaust fumes fill the car again, causing Homer to hallucinate.

The idea for the episode came from Tim Long. One Winter, his town was hit by a blizzard and all schools except his were closed down. Long and his classmates got snowed in at the school. Long said that a couple of dads brought food to the school on snowmobiles.[1] Two years after Long pitched this idea, Matt Selman pitched the setpiece, the opening of the episode, which was a parody of the Cirque du Soleil.[2] The two ideas were merged into the final episode.

In an attempt to get the Cirque de Purée accurate, director Lance Kramer asked the animators to watch the Cirque du Soleil, but they declined.[3] However, Mike Scully thought they did an excellent job animating the scene.[4] Animating episodes set in Winter is harder than a usual episode as clothes have to be seen getting blown about in the wind. The animators have to also make sure the snow stays consistent, with snowflakes being the same size between scenes.[3] The Christmas That Almost Wasn't But Then Was was edited in post-production to make it look old and poor quality. Mike Scully said the post-production crew never get enough credit but they always do a really good job.[4] The producers originally wanted Homer singing along to "Rock and Roll All Nite" by KISS. However, they couldn't get the rights to the song so they went with "Feel Like Makin' Love" by Bad Company instead.[1]