Wendell Borton[1] is a student at Springfield Elementary School. His personal trait is that he always appears pale and sickly, and is prone to throwing up with very little provocation. 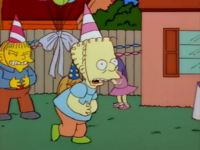 Wendell sick to his stomach at Martin's party.

Wendell is a classmate of Bart Simpson in Mrs. Krabappel's fourth grade class. He wears a light blue shirt with orangish/reddish pants and gray or green shoes. He is most seen playing with classmates such as Milhouse, Richard and Lewis. He is also good friends with Martin Prince, Jr. and helped him with his election as class president (one of the 2 votes for Martin) against Bart.[2] He also joins in with chants or cheers with the class or group most of the time.

He is considered one of the nerds of Springfield Elementary School along with Martin, Database and several others making him a constant and easy target of Kearney and his colleagues. Wendell was also one of the children who become stranded on the island with his fellow Model U.N. Club members.[3] His country in the Model U.N. Club was Mexico. He is very often sick in class or in the hallways of Springfield Elementary (Groundskeeper Willie is used to it by now), and on the school bus especially with Otto driving. In most episodes that have Wendell on the bus he is sitting alone or with one of his friends. He is somewhat of a troublemaker as he is seen in detention and throwing paper airplanes and wandering the halls.[4]

Wendell once threw up at the end of a bus ride after Bart patted him on the back (ironically, congratulating him for making it through the ride without getting sick),[5] and another time he hurled after his school bus crashed off a bridge.[3]

Wendell is seen swimming around in the Simpsons Pool,[6] and also seen taking Otto's turn on the trampoline and unfortunately hitting his arm on the spring in.[7]

Lisa identified Wendell as representing "The Feeb" among The 20 Types of People You Meet in Elementary School.[8]

When the teachers at Springfield Elementary started eating students and passing their disappearances off as "permanent detention", Wendell was among the few survivors when the remaining students were all in one classroom. He was, however, given a detention and sent to the principal's office when his pencil slipped off his desk, thus sealing his fate.[9]

Wendell is seen at the prom and Milhouse's Graduation Party.[10]

This section is transcluded from The Simpsons: Tapped Out characters/Even More Kids. To edit it, please edit the transcluded page.

Wendell doesn't speak much, so he doesn't exactly have a main voice actor. However, in the Simpsons Character Guide book, he is credited as Russi Taylor. His most recent speaking appearance was in "Treehouse of Horror XXVI" (voiced by Tress MacNeille) when he said he didn't puke yet whilst on the roundabout.

Wendell did not appear white or speak until the episode "Homer's Odyssey".