Freddy is a young boy who goes to Springfield Elementary School. 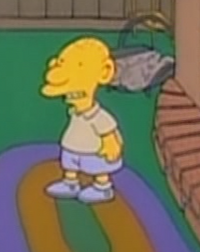 He received a copy of the photo of Homer and Princess Kashmir, prompting his dad to yell at his. His father than gave the image to his friend Al Simmons.[1]