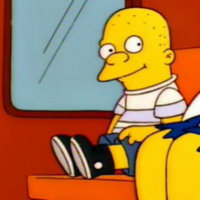 Kearney becomes the Vice-Principal of Springfield Elementary (the principal is still Seymour Skinner), however none of his bullying traits are seen.[13] He will also be Lisa's bodyguard when she becomes the USA president, saying his contract gives him three people to kill in each term.[14]

Kearney was created from "Kearney Street" in Portland, Oregon, where Matt Groening grew up.[17]