The Big Bopper is an American disc jockey, singer, guitarist and songwriter.

He is buried in Springfield Cemetery and voted for Sideshow Bob in the mayoral election.[1]

In an episode of Itchy & Scratchy, Scratchy was sitting in a plane when he noticed his fellow passengers were The Big Bopper, Ritchie Valens, and Buddy Holly. They revealed themselves to be vampires and advanced on Scratchy. Moments after that, the plane crashed.[2] 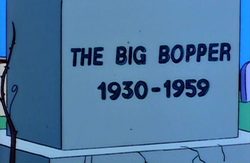