Paul McCartney is a famous British rock musician and member of The Beatles and Wings. 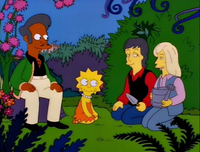 He and his wife Linda hang out on Apu Nahasapeemapetilon's secret roof garden which he shows Lisa after she has issues about becoming a vegetarian.[1] He has also met Krusty the Clown.

Paul McCartney's tombstone can be seen in Springfield Cemetery[8]

He is seen getting into the rocket going to Mars to escape the Earth.[9]

Paul McCartney's tombstone in "Treehouse of Horror" is a reference to the Paul is dead rumors.