When he was young, Cecil was ignored by his parents compared to Bob, similar to the rest of his life.[1] Cecil's dream since a child was to become Krusty the Clown's sidekick on The Krusty the Clown Show.[2] Cecil spent, according to Bob, "four years at clown college", to which Cecil replies, "I'd thank you not to refer to Princeton that way". Krusty and the producers of his show rejected Cecil during his audition. Cecil offered to perform his prepared "pie-in-the-face take" before he was ushered off-stage, but this did not change the producers' minds as Cecil lacked the dignity neccesary to pull the bit off. It was then that Krusty spotted Robert, standing to the side in a fine suit and looking like he genuinely didn't want to be there. Krusty ordered a pie-in-the-face for him, the resulting impact knocking off Robert's top hat and causing his hair to spring up from under it. Krusty hired Robert as his sidekick on the spot. Cecil resented and was jealous of his brother. His birthday is also on May 18, 1973.

When Sideshow Bob was released from prison, Cecil hired him to work for his company building a new hydroelectric dam along the river, proudly telling him that he was Springfield's "Chief Hydrological and Hydrodynamical Engineer". Cecil's true intentions, however, were to skim money from the dam project's contract, build a poor quality dam, and frame his brother for the resulting destruction (mainly due to his still being sore about Sideshow Bob getting the part of sideshow on Krusty's show). Cecil's plot was discovered by Bart and Lisa Simpson, although they initially thought it was Sideshow Bob who was guilty until Cecil revealed his true colors. Ultimately, he lost the laundered money in a struggle against Bart. However, he does try to succeed in doing "the one thing Bob failed to do," which is of course killing Bart Simpson, albeit in an ironically crude fashion as him throwing Bart off of a cliff, although he hints that he'll lie if anyone asks how he did it. This attempt was foiled, ironically by Sideshow Bob. Cecil wasn't done yet, however, so he decided to both blow up the dam as well as directly kill both Bart and Sideshow Bob by shooting the dynamite stick (Bob had to use the Dynamite as a rope to catch Bart), although Bob and Bart foiled this effort by cutting the detonation charge, nearly killing themselves in the process. Despite Bob's innocence, both brothers were sent to prison, since Chief Wiggum did not believe that Sideshow Bob was innocent, despite testimonies from Bart, Lisa, himself, and Lou.[2] 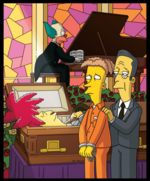 He was seen again when Sideshow Bob was put on trial for trying to kill The Simpsons family and there his father says Sideshow Bob has a rare heart condition which was caused by his many failed attempts to kill Bart.[3] It was then revealed he had to take medication to keep himself healthy but Bart throws it out the window thinking it's a bomb and Sideshow Bob drops dead. Cecil then invites Bart to Bob's cremation and Bart decides to go to change the way he acted during Bob's funeral, however it is just a trap and Sideshow Bob is not dead but is alive and came out of his coffin to kill Bart by putting him in it and getting burned. But Bob's family's plan is yet foiled again and he, Cecil, Robert Sr., Francesca, and Bob's mother are all sent to jail, while Bob is stuck in a straight coat, and most of his family is playing poker. In "The Bob Next Noor", it is unknown why he and the rest of Bob's family were not seen in Bob's cell.

Cecil made a brief appearance in one of Bart's dreams, in which he and Bob are flying kites together.[4]

Unpopular compared to his brother, and being compared to by a new prisoner as like Tito Jackson. Cecil was also forgotten by the Police force for a parole hearing as he was apparently never checked in to prison, as Bob was also arrested at the same time, and so Cecil was released. Cecil rented a hideout. Meanwhile Lisa Simpson was also being overshadowed by her brother. Wanting to be different from Bob, Cecil decided to destroy Lisa for thwarting his plan to destroy the dam. Lisa received a death threat and Marge thinking that it was from Sideshow Bob, called the jail, where he was still, his parole hearing failing. Cecil got a seat on the School Board and as part of a money saving plan, got Lisa's favorite lesson, music canceled and her saxophone marked as a "dangerous instrument". He also joined the Friends of the Library Committee and got the Library's books replaced with graphic novels. He also threatened Krusty with pictures from his Bangkok vacation, so he would stop showing Itchy and Scratchy, which was replaced with Jeeves and Wooster and gets her school permanently closed. Comparing the death threats, Lisa notices the different, yet similar handwriting, just as a wrecking ball smashed through the wall. Gary, Doug and Benjamin trace the IP for Lisa, which leads them to the Warehouse District. However, Cecil was already their and caught them, as the nerds where working with Cecil. However, the wrecking ball was from the Construction Workers Union, as Homer ate their lunch. Cecil planned to freeze Bart and Lisa in Liquid Nitrogen, like he had some door-to-door salesman. At that moment however, the police arrested Cecil.

This section is transcluded from The Simpsons: Tapped Out characters/The Terwilligers. To edit it, please edit the transcluded page.

Cecil, voiced by David Hyde Pierce, and Robert, voiced by Kelsey Grammer, have a relationship similar to that of Niles Crane and Frasier Crane, whom the actors played on the sitcom Frasier. His mannerisms are similar to that of his Fraiser counterpart. Cecil was designed to look similar to David, yet still look like Sideshow Bob.