Steve Mobbs was the eccentric and reclusive CIO (chief imaginative officer) and founder of Mapple Inc.

Steve Mobbs founded Mapple Inc. but was later fired from the company. After an unknown length of time, he returned as the company's CIO (Chief Imaginative Officer). He is a bit of a recluse, spending most of his time in Mapple's undersea headquarters. He always wears a black turtleneck, and one of his favorite phrases is "insanely great". He also has a strong vain streak, as seen when a Mapple employee told him that Lisa was there to see him, and he was busy checking on how many times he appeared in search engine results. His vanity is also seen when he applies the phrase "insanely great" to himself. 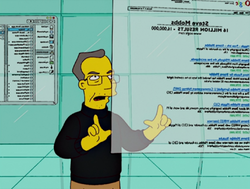 Mobbs makes occasional company-wide announcements which are fed to all Mapple Store locations. Bart pranked one of Mobbs' announcements, making it sound like Mobbs was calling his customers losers, saying he had nothing but contempt for them, and donating all of the company's profits to Microsoft, as well as making it seem Steve Mobbs was gay and Bill Gates was his boyfriend.

When Lisa visited Mobbs to ask for a reduced payment plan on her $1,200 MyBill, Mobbs had her work off the bill by standing on a street corner wearing a MyPod costume and handing out flyers to people and telling them to "Think differently."[1]

The date and manner of Mobbs' death are not known, but in the startup animation of Homer's new MyPad Mobbs appeared and said he was "speaking from beyond the grave". Mobbs was later seen in Heaven bossing God around.[2]

In a pre-death recorded video, Steve Mobbs announced the MyPhone Ultima, which came in two colors: black and slate grey.[3]