Prince is an American guitarist and singer.

When Comic Book Guy went online to find out who was going to star in the forthcoming Radioactive Man film, Prince was among the geeks who received his "Need know star RM pic" inquiry.[1]

Homer told the story of how Lisa got her saxophone. To place the story in its setting (in 1990), one of the pieces of background information he cited was "Back then, 'The Artist Formerly Known as Prince' was currently known as 'Prince'."[2]

When Homer was killing celebrities, one of his victims was Prince, whom he beat and stabbed with his own guitar."[3]

Kang and Kodos hosted a television special where all the celebrity guests were killed and their bodies placed to spell out the episode title. Prince was the "S" in "TREEHOUSE OF HORROR XXV".[4]

Kirk Van Houten threw out a Prince album from his cupboard.[5] 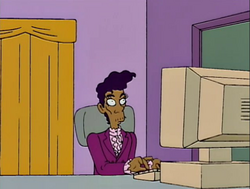