Moe Szyslak is a musician and ventriloquist who performs as Metal Moe. 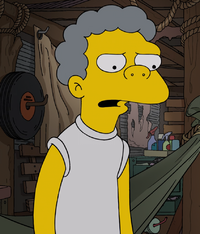 When Moe was young, he lived in Kingfield. He and his friends, Marge, Carl, and Comic Book Guy, stopped the local bullies from hurting Homer Simpson more. The gang then took Homer to their clubhouse to patch up his injuries.

When Homer told the gang about seeing Krusto, they all believed him as they had also seen Krusto. Moe told the gang that Krusto appeared to him as a ventriloquists dummy and told Moe that he had made love with Moe's mother. The gang decided that they needed to stop Krusto so they went to the Kingfield Clown Archives to do research on him. Marge found out who Krusto was and she and Homer went to show the rest of the gang a clip from Krusto's TV show, The Yuk-Yuk Hour with Krusto! Whilst watching the show, Krusto came out of the television at them and tried to kill Comic Book Guy. Marge threw Homer some garden shears, which he used to attack Krusto with, hurting him. Marge then shut off the television, temporarily defeating him. The gang then armed themselves to go and fight against Krusto at Channel 14.

At Channel 14, the kids all attacked Krusto after he revealed himself. However, their weapons were ineffective. Krusto slipped on some marbles and went through a slapstick comedy routine, which caused the kids to laugh. Seeing this, Krusto continued to hurt himself for laughs until Marge gave him Li'l Stinker Cherry Bombs. Krusto swallowed the cherry bombs and exploded, defeating him. Afterwards, the gang made a pact to all come together again to defeat Krusto if he should return.

27 years later, Moe had become a rock-n-roll ventriloquist performing under the name Metal Moe. Moe was performing at The Chalazion Hotel in Las Vegas when Homer called to tell him that Krusto had returned. The gang, minus Comic Book Guy, met up at D'ohs to come up with a plan. Comic Book Guy then turned up with Bert and Lizzie to bring Marge home. Bert and Lizzie were then kidnapped by Krusto, which Krusto revealed to everyone on their phones.

The gang went back to Channel 14 to confront Krusto once more. They told Krusto that they had gotten over their childhood fears so he no longer had power over them. Krusto then told the gang that they had something worse than fears as adults, anxieties. Krusto also revealed to the gang that Comic Book Guy didn't write the love poem to Marge. As the adults were attacked by their anxieties, the ghosts of the dead children laughed, which gave Krusto more power. Bert and Lizzie realized that the laughter audience sign was what was giving Krusto his powers and told the adults to destroy it. Homer found a rock and handed it to Marge to throw at the sign. As she got ready to do so, Krusto attacked her, but Comic Book Guy jumped in the way and got bitten. Marge threw the rock anyway and destroyed the sign, releasing the children's ghosts and defeating Krusto.